Often mislabeled, Sunset Boulevard is about era and perspective, as made evident by its opening sequence. After a series of establishing shots intended to evoke an atmospheric air of classic noir decay we come across the body of our main character and narrator Joe Gillis (William Holden), floating facedown in a pool, dead. By means of an interesting narrative device, all subsequent details are told through his dead eyes, a dreamlike recalling of his last days and eventual downfall. Once more, it is something bigger than that as well. By making the character of Gillis a writer, co-writer/director Billy Wilder turns the entire picture on its head, as there is no telling just how sensationalized Gillis's story, our movie, is. 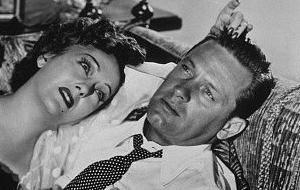 Though we are introduced to Gillis in a postmortem state, he is kind enough to inform us of his past and plight via the voiceover, a common noir, and Wilder, motif. As a struggling screenwriter, he informs us that his more meaningful works have been given the brush by studios, causing him to lower himself to churning out accessible scripts. The chance to tell his final tale in such a glorified, overtly descriptive fashion is actually Gillis being channeled through Wilder. This is the picture that a struggling screenwriter would come up with though it becomes that much more powerful, and critical, due to its ironic pastiche.

Of course, I'd be remiss if I did not, at the very least, make a passing reference to Gloria Swanson's character and performance. Hers is Norma Desmond, an obsessive silent star who has become culturally irrelevant in the era of talkies. Frankly, despite her talent, which is on full display in her portrayal of Desmond, I feel her performance is a bit over discussed. I, for one, am much more interested in what her character embodies and how Wilder juxtaposes the image of the aging silent star to new Hollywood ideals. She, in a word, is pathetic. Desmond is a vulnerable creature, but one that is not to be loved or empathized for. She is brash and arrogant but so culturally and socially deluded that you can't help but feel sympathy for her. She is a reminder of generational gaps and cinematic progression.

Interestingly enough, the manner in which she no longer fits into the Hollywood crowd parallels the manner in which she contrasts the noir elements of the film. In your typical genre piece, our protagonist many times succumbs to the immorality of a dashing young woman but here Wilder decided to tweak such a device, making Desmond, an aging has been, psychologically overtake a strong young man. This is just one of many examples of how Wilder crafted this film, not as a genre piece, but as a picture that transcends such labels. As stated, it knows Hollywood and its tendencies and uses such self-awareness to power through mediocrity. In the end, the result is the crowning achievement of Wilder's oeuvre.

Many of the special features we are presented with are relatively short but insightful in a piecemeal sort of way. They tackle individual issues and themes of the picture and expand on them, which is a bit of a relief in comparison to all the hour long, overly repetitive "making of" documentaries that are continuously cranked out. Still, some elements are better or worse for one reason or another, mostly due to overlapping themes from doc to doc, though there remains a plethora of information to be had.

Oddly enough, I found "The Noir Side of Sunset Blvd." to be most interesting, perhaps because I never thought to group it exclusively in this genre myself. This feature is a take on the film by former police officer Joseph Wambaugh. Wambaugh narrates over and assortment of clips, providing commentary on Wilder's knack for both storytelling and mise-en-scène.

Also featured are bits on both Holden and Swanson, the latter of which is slightly disappointing as I wish it delved a bit further into the psychology of Desmond. Instead, it concerned itself with what differentiated her from her character. Still, it's worth a watch.

As per usual, the same geographical extras are present by way of interactive maps and short clips about why such a location was chosen. By and by, those who generally purchase special editions for their additional content will not be disappointed this release, which is weighty in comparison to its 2002 counterpart.