I always find it interesting when actors decide to venture to the other side of the lens and assume the role of director. I'm not sure why this intrigues me as much as it does but I doubt it has little to do with the inherent role reversal of the scenario. No, that strikes me as rather inconsequential. If I had to pinpoint the notion I find most worthy of analysis it's probably how it allows the actor, an artist in his own right, to really branch out expressively. With such a reversal, an actor yields creative control over the entire picture and, despite having others working under them, the final say is his (or hers as the case may be). There have been some successful transitions over the years, most notably John Cassavetes, who probably is a more acclaimed auteur than actor. There are others, well-known ones in fact, but too many take the safe route. Instead of using this newfound podium of artisan exploration to truly express oneself they opt to craft a rather stale thematic experience and focus too much attention on replicating dime-a-dozen craftsmanship. Ed Harris, who is typically a rather expressive performer, certainly gets caught up in this trapping. Appaloosa bores, and audiences caught on. It barely earned itself $20 million, and had a fairly minor distribution, only peaking at 1,290 screens. 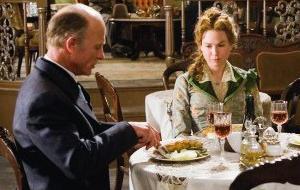 I have already stated that this film "bores" but I think I'll clarify a bit so this statement is not taken the wrong way. While it seems a rather clear-cut comment, I typically hate the rather generalizing nature of labeling a film with such a term. What is meant here is that the entire film lacks creativity in every way. The characters are paper-thin and genre exclusive. Harris himself plays Virgil Cole who, along with partner Everett Hitch (Viggo Mortensen) polices the titular town. Marshall law is administered and the two men are driven to restore order by driving out local gunslinger and proprietor Randall Bragg (Jeremy Irons). Yes, the plot is a familiar one and it's made even more commonplace by Harris's instance in painting Bragg as evil from the opening scenes. This robs the film of true moral conflict between the two forces and, to make up for this straightforwardness, Harris decides to focus on his character's inner turmoil instead. The root of this turmoil is, of course, a woman. Enter Allison French (Zellweger) a redheaded stranger (channeling Claudia Cardinale in Once Upon a Time in the West) who becomes the only eligible woman in Appaloosa. Other female, and male characters for that matter, might as well just be cardboard-cutouts in a tourist trap of a ghost town. They are that dispensable.

Having established his characters, at least the one he feels like dealing with, Harris prods along slowly, over-photographing the rather banal nature of western landscapes. Is the scenery nice? Well, I'm sure it is in person but one can only take so many boringly photographed horizons. They do little other than to emulate the pace of other genre outputs, making this effort even less unique. The psychology of the main players isn't much better as it's more or less a distorted love triangle. Sigh. If I had to really delve into where Harris went wrong, it would be that he seems too rooted as a director in authenticity. The special features that accompany the DVD back this up and one featurette even celebrates the "recreation" of the town. Others talk of the development of characters to meet the film's traditionalistic air. While there isn't a need to reinvent the genre, à la Robert Altman's McCabe & Mrs. Miller, doing something of interest and insight would be appreciated, and likely more entertaining as well.