With a strong cast and a title evocative of Alain Resnais's masterful Last Year at Marienbad, I had high hopes for this little-seen film. Of course, a name alone is hardly cause for praise but my excitement comes from the ideas it presents, not the words themselves. Brideshead, like Marienbad, is a lavish estate, one that means more to our characters than marbled halls or lush décor. The settings in both films are something greater, indicative of how impacting an environment can be. Unfortunately, unlike Resnais, Brideshead helmsman Julian Jarrold failed to truly utilize his settings or the potential that the "revisiting" aspect of his title is indicative of. Audiences didn't catch on to the concept either and its returns were less than stellar though a very low-key release is partly to blame. It peaked at a paltry 501 screens and only grossed $6.4 million domestically. 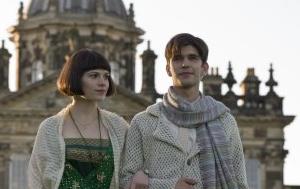 Motion pictures that show such ideological promise may surprise or disappoint but never fail to fascinate. This statement may seem blanketing but it's admirable when a film can manipulate rich environments and times into something relatable or relevant. Still, this may be asking a bit much and sometimes other, more intangible considerations such as the nature of art or love are explored and successfully at that. With Brideshead, it appears Jarrold aimed for these broader notions but did so in an equally broad way. Because of this his execution largely fails.

The matters of both art and love are largely explored through our lead Charles Ryder (Matthew Goode), a comparatively poor art student who, by chance, gains a glimpse of upper class leisure. By accident he befriends Sebastian (Ben Whishaw) who soon becomes infatuated with Charles and his musings of art and expression, made evident in a series of sequences at the titular manor. Sebastian showers his guest with adoration but Charles aims his affection at a different target, his sister Julia. Now we're on to something. We have a young artist in unfamiliar social territories, finding inspiration everywhere, and feeding of the works now surrounding him. This may sound great on paper but unfortunately Jarrold isn't much for translating it to something bigger. Instead of delving into any of the finer points of the aforementioned he glossed over them with a series of trite observational speeches. The motif of extended monologue has been used in the past, and with success, but here the emphasis skirts thick content, focusing instead on how the listeners react. This notion actually sums the movie up well, because it cares more about being liked than it does about actually being effective.