Sprawling and epic, Amadeus tells the tale of our titular composer in a lavish epic of excess and genius. The story is told through the eyes of court composer Salieri (F. Murray Abraham), a self-made rival of Mozart (Tom Hulce) who claims to be responsible for his death. The narrative is composed of a series of flashbacks in which Salieri recalls the events leading up to Mozart's death and his own institutionalization. As a narrative device, the story is presented almost episodically, as our narrator takes confession. 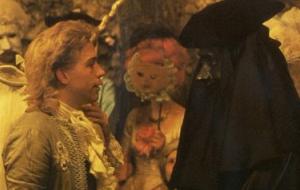 Aesthetically, the film marvels. No longer confined by its original medium (a stage play by Peter Shaffer), Amadeus is now physically expressive as only cinema can convey. The look of the film is extravagant without a hint of artifice and its use of natural light was watershed, further aiding atmospherically. While the film has come under scrutiny for being historically inaccurate, such criticisms are narrow minded and unnecessary. Here we are not meant to be educated but to immerse ourselves in what the story has to offer beyond its romantic aesthetic.

Screenwriter Shaffer and director Milos Forman have crafted a layered story that offers an array of considerations, most of which are artistically grounded. The movie is never immediate but instead lets its characters and events unfold outwardly, shaping its own cinematic world. Salieri is shown to be a devout man, one that does not know the pleasures of the flesh and instead tries to serve God through his music. He has a gift, and one can sense pride in his service of the Lord. It is not until he is introduced to the young prodigy, so behaviorally opposite, that his grasp on reality, nay, sanity begins to slip. Eating at him is Mozart's sublime talent, which is always on display. While Salieri toils to produce an imperfect march, Mozart betters it without effort. What's interesting is how boundless and immediate "Wolfy's" genius is and how this shapes him, and others, as characters.

Forever the entertainer, Mozart can't help but live outside his means, projecting a social image that matches his music. He is forward, crass and stubborn but never loses his creative drive. What makes Salieri equally interesting is how observant and reflective he is to the point that he's more aware of Mozart's faults than his own, filling him with consternation. He hates that such a "creature" has been bestowed with a gift that eclipses his own. Still, the similarities between the two are endless. It is because our filmmakers establish the characters as being so paradoxically alike that this feud can exist and bear such rich, artistic musings. It's not the filmic pinnacle of showcasing capacity and struggle but its own illustrious reputation is certainly earned nonetheless.

In making Amadeus, Forman raised the bar in terms of directorial attention, creating a lush world of tapestry and décor in 18th century Vienna. Everything about the film is large - sets, costumes, scope - and his lens, ever full of detail, captures every bit of it. Sadly, this subpar BD transfer will temper the viewers' experience.

From a distance the image is acceptable but hardly demonstrative of 1080p capabilities. That being said, it does surpass the quality of the standard DVD release but not markedly so. Both formats possess some grain, though it isn't as heavy in the BD transfer. In the past, I had wondered if this look was purported or merely a flaw in the image due to the film being shot with natural light. Having not seen the picture in theaters, I can't say for sure what cinematographer Miroslav Ondrícek's intent was but I assumed it to be clearer, smoother; not necessarily crisp and bright but certainly warm and deep. In this, the latest release, the grain seems to hinder some appreciable detail, which is odd, as it usually aides it. Still, Warner Brother's Blu-ray treatment of the film is clearer, offering slightly better clarity than its predecessor but not enough to truly impress. The larger difference comes in the form of brightness and contrast, two strong suits of the format. Here the darker, more foreboding imagery comes off as deeper while the naturally lit interiors aren't as luminary.

The sound mixing of the transfer seems adequate though, again, not spectacular. It's difficult to discern any major changes in the audio tracks but everything sounds more cohesive. The more powerful pieces of Mozart's symphonies still boom yet little is done to bring out the minutia, the genius, of his work. As with the image, the audio is fine but lacking. In this, much of the visceral impact of seeing the film is lost as its potential went uptapped. I would still recommend this above the DVD release because it is superior, though I wouldn't rush to get a second copy.

While I applaud Warners for not releasing this in standard Blu-ray casing, their efforts here might have gone to waste. The box and inner booklet look decedent but its functionality is of question. The pages are glued directly into the casing and are awkward to handle, as they can't fully open. Because the extras are identical to the DVD version of the director's cut, only one disc is utilized here, and a CD of Mozart's music accompanies the set. It's an interesting little compilation, though I'm curious as to why it too wasn't a BD disc, allowing fans to immerse themselves in TrueHD audio. While this feature does allow for use away from one's home theater system, it feels more gimmicky than thoughtful.