I was recently asked for my consensus on the films of Hal Ashby and I was surprised to see how low I rated his works. After all, his style, which is generally understated, is never in poor judgment or taste. Also working to his advantage is his constant drive in addressing societal issues, sometimes more subtly than others. His strong suit seems to lie not in his conveyance of points but in the performance he garners from his actors and his timely sense of atmosphere. The way he incorporates music is exemplary. Blanketing traits aside, the point is that, in watching Ashby's films, it's clear how much he cares about the medium and furthering his importance within its realm. That is not to say he's overly self-aware or important but, as with all directors, I feel that his ambition can sometimes cause his execution to go awry. This is the case with Being There. 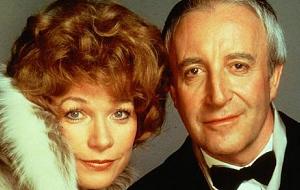 Despite the heavily affluent social concerns in the movie, Being There is a film primarily driven by the interesting people that inhabit it. Hence, the characterization is extremely important. Our protagonist is an odd one, not leading the picture's action through his own but instead through the reactions of others to his bizarrely calm demeanor. He is Chance, often mistakenly called "Chauncey Gardener" due to that being his actual lot in life - tending gardens. Chance (played by the chameleon-like Peter Sellers) is a product of social isolation and television. He represents the extreme. Having lived in the house where he worked all his life, he knows nothing of the outside world aside from what the little screen has taught him. It is unclear how he learned his trade though he performs it adequately.

Characters like Chance and films such as this are often falsely interpreted as taking place in far too literal of circumstances. Upon watching it I immediately drew comparisons to Mike Leigh's 2008 release Happy-Go-Lucky, whose lead Poppy exudes happiness regardless of her surroundings. These two represent the extremes; litmus tests for a culture where others are measured by their interaction with them. However, differences do exist. While Poppy consciously eschews the pressures of unhappy stimuli in her life, Chance acts out of ignorance, which seems to be more widely accepted. His limited understanding of scenarios is overshadowed by his agreeable nature and the public, with little exception, laps it up. The manner of Chance's portrayed presence is to comment on how reliant America is becoming on television, or other media outlets, in educating us. It tells of a collectively accepting nature that exists in our country, where vague musings and content personalities are becoming the cultural norm. Of course, having been made in the late seventies, Ashby's Being There isn't a reflection on contemporary society but that's not to say the message isn't an important one. The problems laid out in the movie have only grown with time, though not as exaggeratedly as Ashby portrayal would leave one to believe. Nonetheless, the film is cause for reflection and the famous last shot will only lead to further speculation of its ultimate message. Any work that evokes such thought in its viewers is fine by me.

While the movie itself falters from being a bit overreaching, the transfer, particularly that of the image, doesn't feel nearly ambitious enough. This isn't to say the picture is inherently poor, but it fails to wow in the way most other BD releases do. It is evident from the opening scene that recreating the interior lighting was a problem for the Warner Bros. crew. Digital noise is fairly evident throughout and other scenes and details feel washed out elsewhere. Exterior shots fare better though and the busy streets of Washington D.C. look more indicative of what this format is capable of. Without having the luxury of seeing the original DVD print, I will say that the coloring here seems apt and typical of what Ashby normally strives for. Still, I can't help but thinking more attention could have been given in way of creating something demonstrative of Blu-ray capabilities. As for the audio, it seemed competent but the dialogue driven nature of the film makes it hard to distinguish just how well realized it is.

I would say that adequate or acceptable would be fine words in describing the nature of the transfer as a whole though part of me would want to see more care given to older films such as this. Of course, Being There is hardly a sumptuous visceral feast but, in talks of the future of home viewing, further steps can be taken in the future.