Opening on a respectable 2,022 screens, City of Ember landed with a thud this past October, and after two weeks of release it dropped down to a paltry 536 screens. Its location averages followed suit, and the sci-fi flick grossed a mediocre $7.8 million when all was said and done. 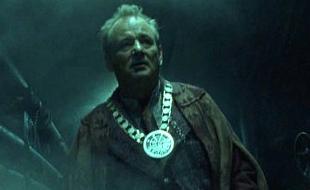 There has always been an innate human interest in predicting our own demise. It has been a topic of discussion for years and has been the subject of innumerable outputs from the various artistic communities. Even recently the cultural call-to-arms over global warming has afforded theorists with new scenarios about how our end will come. These are bleak considerations, yes, but important ones. Showcasing how and why humans will leave Earth ultimately provides insight into our importance here. It gives weight to our existence. Contemporary cinema, an art form rooted in relevance, always takes a shine to new possibilities involving a species escaping extinction. Problems arise though when newer directions aren't undertaken or when new ideas aren't incorporated. In these instances, the aforementioned idea is reduced to a gimmicky narrative tool. Unfortunately, City of Ember falls into this category.

Now underground, the human race lives amidst dirt and darkness. The "great generator," a flickering testament to the hopes of mankind, artificially lights their singular city. Emotions strain with the power source, causing many to doubt if we will ever inhabit the surface again. Culturally, things are even bleaker. Jobs are now drawn by chance and technological progress has halted. This marks an interesting point about what screenwriter Caroline Thompson, who adapted the film from a book by Jeanne Duprau, and director Gil Kenan make of the human condition. From the start of the film it is established that man's eventual return above ground has been sabotaged by greed and power lust. However it's as the movie progresses that it becomes clear just how thinly veiled all of these ideas are and how the character development fails to aid the film as well.

A few central players occupy the bulk of the film which, because of its themes, should largely be concerned with detail. Instead of establishing a convincing atmosphere, the movie largely concerns itself with character action but little with the purpose of these actions. It's all very superficial, though I suppose this is due in part to it primarily being a family film. Nonetheless, the opportunity is there to deliver something new and thought provoking but little imagination is put into it. It's Bill Murray's performance that basically sums up the film in its entirety. Murray, who has done some of the best work of his career this decade, is on autopilot here. As the mayor of Ember, he adds little depth to his role, as if disinterested. The filmmakers seem to parallel this mentality, never adding any weight or importance to a very light plot. It's ultimately forgettable.