Having only opened on seven and peaking at ninety-six screens nationwide, Frozen River is the embodiment of an "under the radar" film. Throughout the course of its limited run, River managed $2,429,187 - an acceptable total considering its low exposure. Arthouse fans that missed it in theaters have already been taking notice to it on DVD. Melissa Leo's Best Actress win at this year's Independent Spirit Awards also bodes well, as the televised ceremony is known to shed light on pictures kept in the dark; pictures that deserve to be seen. And, while I fail to see any brilliance in this particular film, it's, at the very least, worth a look. 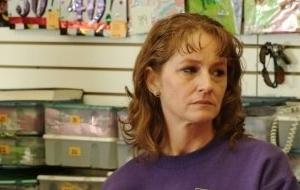 It is often said that what we long for, strive for, defines us. Frozen River is a film of wants and needs and of characters struggling to reach goals, no matter the odds. These goals do not seem like lofty ones, though personal circumstance dictates otherwise. Our protagonist is Ray Eddy (Melissa Leo), a mother of two and wife of a problem gambler. We never meet her husband. As the picture opens we see her on the cusp of reaching her dream of procuring a doublewide trailer for her and her kids. For some, such an ambition seems piddling and the difference between it and a single trailer negligible. This ignores what her mark stands for - a mother's ability to provide for her children. Themes involving responsibility course throughout the picture, and the idea of motherly love is shared by Lila (Misty Upham), who becomes Ray's counterpart. Lila is a young member of the Mohawk tribe whose reservation can be found along the New York and Quebec border.

That last, geographical detail adds a layer to the film, an important one, as United States law does not apply within Mohawk territory. As a result, moral and legal boundaries become blurred and the weight of the law does not necessarily outweigh that of will. Desperate, the pair finds a way to make money (their MO will go unspoiled here, though it obviously involves borders). What troubles me about the film is, while calling attention to a worthy political topic, it uses it as a contrivance, spending more time on characterization than content. This wouldn't trouble me but much of what we learn of our leads could have been accomplished through adequate development. Their story is touching, if a little convoluted, but it tiptoes around the relevant cultural issues at hand and fails to draw comparisons between our many borders. These days, notions of national security are everywhere but River gets swallowed up in musings of personal consequence without seeing the bigger picture.