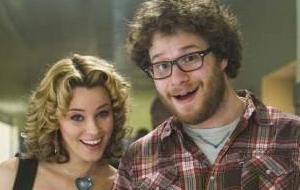 At the heart of the film is a relationship - one that bends, breaks, and mends all at the convenience of the 101 minute run time. Any investment in the characters is largely due to the nature of the actors themselves. Zack (Rogen) and his long-time friend and roommate Miri (Elizabeth Banks) are both well suited for their roles; Rogen especially is no slouch at playing, well, a slouch. The two thesps have worked together before and their chemistry is believable enough despite their vastly different "looks". As evident by the title, their financial shortcomings lead them to the inevitable: making a self-made, self-starring pornographic film. Typical jokes ensue.

As a whole, the movie is pretty bare bones, though Smith's lack of experimentation is of no surprise. The boundaries he pushes are not of cinema but crassness. Zack and Miri only differs from his usual outputs by taking the topic of sex, which is often reduced to a conversational topic, and bringing it to the forefront of the picture. The results are poor, failing to surpass or distinguish itself from other lewd genre outputs (genre meaning comedy, not porn). Minimal musings on the complications of interjecting sex into a relationship are present but this comes with the territory. Really, the only audacity shown is in the film's driving pulse - showing a porn's production within MPAA confines. In that, the limits of content still aren't convincingly pushed. It is evident that the cast and crew enjoyed themselves for what it's worth. I hardly see that as a positive in a critical sense though.

One of the reasons for Smith's success is his direct, personable nature, which the extras reflect greatly. For as much as I disliked the actual movie I was that impressed with the special features. I wasn't particularly entertained by them, but applaud their inclusiveness and how they reflect on the picture itself. For this reason I actually recommend the two disc edition to fans of the film.

Unlike the quickly pieced together "making of" shorts that are so commonplace these days, Zack and Miri's is over an hour long and quite comprehensive. "Popcorn Porn" deals with the particulars most applicable to all of Smith's films, namely casting and writing. It explores the picture's progress from start to finish and is largely shown from the perspective of our director. It's in "Money Shots" that the actors get more of an opportunity for their voices to be heard. The series of webisodes showcases the cast on and around the set and acts as a testament to their enjoyment in working on the project.

Other minor featurettes include a humorous Q&A segment from 2008's Comic-Con, outtakes, deleted scenes and the like.