When approaching a film like this, one must do so with caution. Do I say this because it's a terrible movie? No, though that much is true. The warning, if you will, is due to how easy it is to write off the picture, condemning the inherent silliness of the plot without trying to find something, anything of merit. Apparently, the public (read: children) found it enjoyable, as Chihuahua grossed $94.5 million domestically, peaking at 3,239 screens. 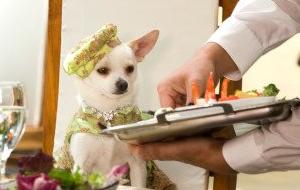 When seeing the Blu-ray case boasting this as "The best Chihuahua movie ever made," my immediate reaction was to recall others I had seen. I came up with nothing. So, by default, it wins in my mind, though without setting the bar high. The plot is formulaic, using typical narrative devices but with dogs, not people, at the forefront. Here's the long and short of it. Chloe (voiced by Drew Barrymore) is the spoiled titular dog that, thanks to a careless sitter, finds herself lost in Mexico. During her adventures south of the border, she encounters the following: kidnapping, dogfights, mountain lions, conmen animals, and, of course, a secret society of Aztec Chihuahuas, all of which cater to one-minute attention spans. It's not the ridiculous nature of these reveals that hinder the film's quality but how unnecessary and bombarding they are.

Unlike other family efforts, Chihuahua offers nothing to accompanying parents or guardians, instead focusing its energy on packing the story with menial happenings. Lessons concerning class boundaries are minimal and the main take of the picture concerns acceptance, but in an overtly simplistic way. Its portrayal of Mexico and Mexican cultural is generic and stereotypical, though not offensively so. I didn't expect it to be insightful, but sadly, the concept of this movie had potential, potential to be funny be it or intentional or not. It's neither. In fact, it's not really much of anything.

Despite the special effects being fairly low-grade, the image transfer from Disney is surprisingly competent. The image is, for the most part, clean, exhibiting a fine grain but no discernible flaws. Facial features show good detail, both in humans and dogs, the latter being especially impressive due to the fineness of their fur. I found the color palette of the film to be too matted though, as if temping a pastel feel, and, because of this, little pops off the screen. This complaint lies with the picture's cinematography though, as the look attempts to create congruency between the practical and special effects. It works to an extent, but superimposed computer effects are evident at times. Younger audiences won't complain.