Futurama: Into the Wild Green Yonder

I should start by saying that I've always been a Futurama fan and the quality of this release came as a surprise, a pleasant one, after the mediocre Bender's Game. Being the last of four films, Into the Wild Green Yonder has the difficulty of concluding a beloved series while introducing entirely new elements to it. In this, some issues are rushed, others overplayed, but it remains the most competent of the four pictures, and a worthy conclusion to what Matt Groening and David X. Cohen started back in 1999. 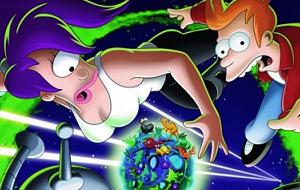 The story opens in unfamiliar territory. Instead of seeing the Planet Express ship weave through the sites of New New York, its crew is enjoying Mars Vegas, a lounge singer (voiced by Seth MacFarlane) crooning all the while. We learn that this attraction is to be torn down to make way for an updated version of itself, presenting the creators with a chance to evoke ecological concerns. In the past, the show has made tongue-in-cheek references on the deteriorating state of environmental stability and little changes here; it makes a point without being preachy. In fact, Green Yonder treats conservationists - namely a group of "eco-feminists" - as somewhat bumbling and annoying, providing an objective balance rather than canonizing them. They oppose the construction, headed by developer Leo Wong, citing the proposed location is still rife with life. The established rivalry grows once it is revealed that Wong plans on developing the universe's largest miniature golf course, which calls for the destruction of sightly meteors and stars.

Across its five seasons, Futurama has created a complex network of characters and storylines so it's expected that Green Yonder incorporates much of this; it does and has subplots in spades. Many of the show's reoccurring players are brought in for one last appearance, but never arbitrarily, as in past films. In fact, I would say the picture's greatest strength is in its polish and restraint - the writers clearly learned from their previous mistakes and adapted accordingly. Green Yonder never over-extends or weighs too heavily upon itself; it simply exists. Naturally, in the effort to tie up loose ends, some storylines feel rushed, unfocused - perhaps even trivialized - but these qualms are minor and the overall experience is enjoyable. I would say that I hoped for just a little more in the way of a finale but, as indicated by the ambiguous conclusion and commentary tracks, there still may be more to come after all. I can only hope.

Due to the nature of the animation used, this is as good as Futurama can look - colors are bright and vibrant, appropriately contrasted and hued. Commendable is how the creators refused to stray from the film's roots, eschewing showy computer animation in favor of perfecting its familiar aesthetic. Of course, a cartoon drawn in this style hardly pushes the boundaries of 1080p potential but will please fans nonetheless.