Being a British film, there's little mystery as to why this gem was seen by so few American moviegoers - it peaked at only 202 screens and grossed $3.4 million domestically. 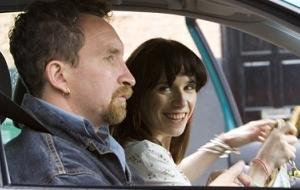 Happy-Go-Lucky is a film immersed in realism that one should not take literally. It's paradoxical in this regard but, in the end, makes valid points about interaction within a contemporary society. This movement is channeled through the character Poppy (Sally Hawkins), a schoolteacher that exudes happiness regardless of the situation. We're first introduced to Poppy as she visits a bookstore, jollily chatting up the obviously annoyed clerk, before leaving to find her bike, her sole mode of transportation, stolen. "Oh, no, I didn't even get to say goodbye," she says with an air of nostalgic jest, before continuing down the street. A smile crosses her face.

The movie is filled with little moments like this; with the conflicts she faces varying in severity. She brushes it all off. In watching these scenarios unfold, I began wondering what director Mike Leigh (Vera Drake) was getting at and what point, if any, he's trying to reach. Is Poppy's happiness ostensible or deeply felt? Is her demeanor at all times appropriate? Is she one-dimensional or will she change, grow? These are the questions that plagued me throughout my viewing. Thankfully, we get answers.

As the film continues, the ever-happy Poppy begins to discover the weight her actions carry. Gradually she realizes there are consequences for behavior. It's an interesting notion, that treating others pleasantly can have negative results, but the depth of Leigh's cultural commentary extends beyond this. Some who encounter Poppy act abrasively towards her good-natured rousing though we're given enough to infer that this is due to other issues in their lives, those that go unseen on the movie screen. In this, the film expands on happiness as being something situational, not constant, which supports the idea of Poppy being more of a representation than an actual person. Even with all her clumsy charm she fails at bringing true happiness, hell, even a smile to the faces of others. Obviously pained, she presses on, learning the costs of happiness in a society far too complex for such a one-dimensional treatment of it. She sees people she cares about struggle while she puts on her happy front, slowly learning that even the most innocent pleasantries aren't interpreted the same way by all. In fact, these interpretations and the subsequent reactions can, and do, range in severity. In this, the idiom, "The road to hell is paved with good intentions," is more than applicable here. While Poppy's life doesn't even approach the hellish, she does learn that it's best to channel her efforts to those in need of her exuberance. Funny how such a simple thing like the idea of happiness can be so profound, no?