There was really no stopping it. After the unforeseen popularity of its TV movie predecessors, it was obvious that the High School Musical series would eventually transition to the big screen. It did, and with success. After grossing over $42 million its opening weekend it fell almost sixty-five percent to $15 million the following week, yet still managed $90.5 million nationwide. It saw a high of 3,626 screens during its run and will surely be seen in quite a few homes as well. Its popularity is a presence and an undeniable one at that. 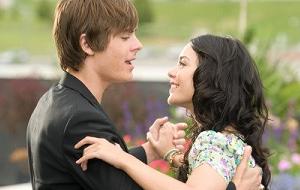 Having not seen the first two installments of the series, I'm at a loss to describe how well the characters are developed here. Truth is, they aren't, but this may have been covered previously. The lack of depth to the characterization doesn't really seem to affect the story; the entire film is an ostensible look at the high school experience, particularly leaving it. It should be said that the movie isn't intended to entertain the ages it portrays. Its target demographic is much younger and the picture caters to that, reducing the complex emotional spectrum of late teens to states of joy and confusion, and downplaying any real issues teens may face. Everything is given a family-friendly glossing over and it's far too bubblegum for my taste. HSM3 paints an unrealistic picture of high school and simplifies the difficulties of growing up. While I don't think its necessary, or appropriate, to bog down children's films with complicated ideals, a subtle layering of themes would help. Hell, it seemed to work for WALL-E.

As far as musicals are concerned, HSM3 is adequate, though not spectacular or even necessarily good. The choreography was fitting but I found it to be somewhat restricted by lackluster sets. At times they conveyed a believable high school environment but at others they did nothing to transcend those of a stage play. It is in this regard that the movie begins fighting itself. Unlike the beautiful marriages of cinema, music, and dance in Powell and Pressburger's masterful The Red Shoes, HSM3 fails to establish the strengths of either medium well. The young cast (which includes Zac Efron, Vanessa Hudgens, Ashley Tisdale, and Lucas Grabeel) is vocally gifted, which is much appreciated in the wake of my having seen Mamma Mia!. Still, the presentation of the songs is poor, over-emphasizing dance to the point that, at times, they don't even both to lip-sync. It's clear that the filmmakers strove to create a cheerful little flick and that's all this is, but in the shallowest of terms.

The special features included here are standard fare such as bloopers, deleted scenes, and a few theme-based featurettes, including a cast goodbye to East Side High. Try to contain your tears. A second disc that contains a digital copy of the film is also available with the extended edition.