I've Loved You So Long

Flying well under the radar during its theatrical run, I've Loved You So Long grossed $2.9 million domestically after a several month tour of the arthouse circuit. Despite only seeing a high of 69 screens, it should fare well on DVD due to its large critical approval and award season notoriety. At the very least, serious film enthusiasts will be interested. 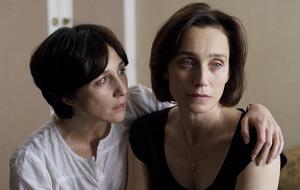 This is a film I wanted to like more than I did. It has the necessary aspects of being a good movie, headed by the brilliant performance of Kristin Scott Thomas, but seems to be lacking direction. Scott Thomas plays Juliette Fontaine, a woman coming to live with her sister (Elsa Zylberstein) after a fifteen-year absence. It is in this mystery that freshman director Philippe Claudel decides to keep us at arm's length, changing the tone from a competent character drama to something of intrigue. The secret of Juliette's past is a complicated one, and bits of it are revealed periodically throughout the film. In this, Claudel falters. Failing to weigh these reveals properly, he over-emphasizes the enigmatic, playing up the mystery instead of fleshing out the details. The pieces of her proverbial puzzle are essential - what isn't is the way it's used as a narrative crux. Still, the film does have its merits and I'd be remiss to not delve into those as well.

As mentioned, Scott Thomas is exemplary. Backing her is a solid supporting cast, which includes Zylberstein, Serge Hazanavicius, Laurent Grévill, and Frédéric Pierrot. All players directly interact with Juliette, adding perspective to a world she's been apart from for so long. During her absence our lead was sequestered from the moral necessities of life - family, friendship, growth, love. These characters, these people, form a world foreign to her, and do so convincingly. She's quiet, introverted, and secretive and her reintroduction into society challenges not only her but those around her. In this is Claudel's greatest strength. He realizes how people interact, feeding off each other, and develops these facets of the story to a tee. The conversational aspects of the film feel largely genuine, though a bit polarized. Concerns of the characters are valid, but more care could have been given in how quickly they expend emotion. Anger and frustration seems to come at the flip of a switch. Such immediacy isn't always convincing, because time is spent qualifying Juliette's past rather than delving into the psyche. Still, the movie works on some levels and is worthy of a recommendation.

While it's evident from the film's ordinary, soft-stated aesthetic that its budget was lackluster, that didn't prevent Sony from demonstrating exacting care in their BD treatment. The image is remarkably crisp and devoid of any flaws. Detail is rich, particularly in faces, aiding the mood of a heavily character-driven drama. Cinematographer Jérôme Alméras's lens is largely static, letting much of the movement occur within the frame. The transfer compliments this motif - clarity and depth being the result. When his camera does move, the action is captured smoothly, with no blurring to be found. Exterior shots look vibrant; others feel appropriate; others look astounding. As with What Just Happened, the digital intermediate processing gave a big boost to the image quality on this format.

The sound track is adequate, as there isn't much to report in such a dialogue heavy film. The special features are in standard definition.