Scattered throughout theatres from late November to early March, Milk performed modestly well, grossing $31.1 million domestically, making it Gus Van Sant's most successful film since the Finding Forrester. Following an initially low-key release, Milk benefitted from an award's season boost and peaked at 882 screens, one week after it was nominated for eight Oscars. 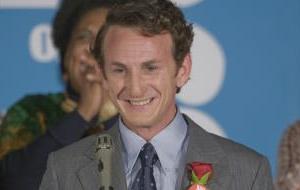 To paraphrase Ingmar Berman, there are two ways to be a proficient filmmaker: by being a master craftsman or an artist. While I agree with this theory to an extent, it is overtly polarizing and ignores Bergman's own aptitude in both cinematic subjects. Few modern directors competently combine the two, though Van Sant has been close on occasion. In his latest he errs on the side of caution, delivering a straightforward biopic on the first openly gay man ever elected to public office. Technically, it's sound. The ensemble cast puts together a handful of fantastic performances, headed by Best Actor winner Sean Penn. His supporting players (James Franco, Emile Hirsch, Diego Luna, Alison Pill and Josh Brolin), in capturing the spirit of their characters help shape our understanding of Harvey Milk as a person. Without the given emphasis on those around him, there would be difficulty in understanding his drive, his motivation. This is only appropriate, as Milk did not act entirely on his own behalf. It's nice to see equal weight given to those who inspired him.

From a political standpoint, there is little coincidence in the timing of this film, as its issues mirror many of our modern concerns. In a way, it's a triumph whenever pictures like this are made, as the gay community has often been either mistreated or underrepresented in film. Van Sant portrays Milk's lifestyle in a celebratory fashion, showing his passion for life, the lessons learned from his failures, and the fruits of his labors.

With Milk, it feels as if Van Sant's aim was to address more than a life but a culture, to which he succeeds with mixed results. Still, relevant undertones extend beyond this, particularly by exploring singer Anita Bryant and her 1977 movement against homosexual rights. It's issues like this that so closely parallel our own, specifically the inclusion of Proposition 8 on last November's ballots. Prop 8's passing, which invalidated same-sex couples' right to marry, was a wake up call for our nation, as it celebrates inequality. Because of this, Milk is a bit of a wake up call in its own right, demanding the homosexual agenda be equally acknowledged. In a way, it's a filmic embodiment to the old phrase, "The more things change, the more they stay the same." Hopefully, this won't always be true.

Being a film that largely emphasizes time and setting, it is only appropriate that the image reflects this, enriching the mood of an already atmospheric picture. Van Sant builds his cinematic world in a twofold visual narrative, combining old news footage with material shot specifically for the film. Because of this, concerns of cohesion emerge. To prevent jarring transitions between old and new footage, Van Sant, through the lens of cinematographer Harris Savides, shrouds his image in grain, though not at the expense of detail. The image still exudes a 1970's feel while providing BD enthusiasts with above average picture quality. Great care was put into their handling of the movie, and no discernable flaws or blemishes are present. Even the usually troublesome spots, like shadows or dark areas, are without excess digital noise. Detail extends to the corners of the frame, their sides devoid of blurring.

While the film's aesthetic is largely intended to evoke an era, there are a few instances where Van Sant steps away from this movement, creating beautiful, unmoving frames (a brief scene involving a whistle immediately comes to mind). While I cannot pinpoint a formal reason for the shift, I can say that these moments are represented exceptionally well in 1080p. This is complimented by the image's usual grain, as these crystal stills nearly leap from the screen in comparison.

The transfer also delivers in the audio department, though I was less impressed here than with the picture. Despite the film being dialogue heavy, several scenes afford offered the chance to produce a great sound track - we'll have to settle for a "good" one. As raucous crowds converge onto The Castro, the noise blurs a bit, making it impossible to pick out the minutia of mob. Perhaps this was intentional, but instances of volume and audial detail are rare in such a movie and this seemed like an appropriate enough time to show off a bit. The score, which is commendable, and the musical selections all sound crisp and are well cued.