Filmmaker, essayist, and artist, François Truffaut has always fascinated me. His involvement was integral in making the French New Wave as weighty and important a movement as any other and, as it developed and changed, his voice was never lost. This voice is a personable one, filled with an energetic playfulness that often disguises his more serious intentions. It's a delicate balancing act of language, both oral and filmic, and, although I prefer his early films, (most notably Jules et Jim) The Last Metro captures this balance smashingly well. 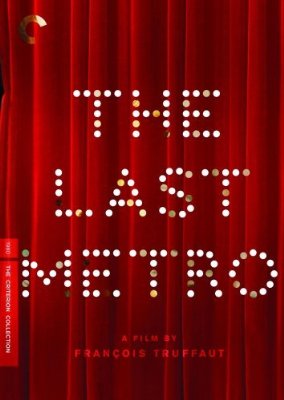 Set in Nazi-occupied France, the film opens with an introductory monologue that tells of the picture's setting and mood. It's quickly recited, briskly edited, and markedly Truffaut. It tells of the authoritarian shadow cast over the area but shows little of its sweeping effects. Instead, the narrative concerns itself more with the people involved, those living under the regime's influence and how they, especially the creative community, adapts under such conditions. Truffaut realizes that by 1980, the year of the film's release, the public was fully aware of the Nazi horrors on a global level. Thus, his story is one of perseverance on the human level and how throughout it all the artistic spirit endures.

The movie is mostly set indoors, away from the marching soldiers and propaganda. Working tirelessly is a theater company headed by Jewish director Lucas Steiner (Heinz Bennent), a creative man forced to hide in his own theater's basement. On the surface, his gentile wife Marion (Catherine Deneuve) ostensibly runs the show, passing along Lucas' notes to the cast and crew (which includes Gérard Depardieu) in an effort to replicate his past creations. While an air of danger exists, Truffaut makes this a secondary concern of Steiner's, whose main focus is on the play. Amidst one of the greatest horrors in modern history, he worries more about critics than soldiers. This is a bold idea on the part of Truffaut, but it's clear that he doesn't wish to trivialize the broader cultural matters but celebrate the artistic ones; how an artist, under any circumstance, has an innate need to create. This desire drives Steiner. His role in the theater is less immediate but no less impacting. Still, like all Truffaut films, humanistic considerations exist.

The featured theater company is intended as a microcosm of interaction. As the outside world buckles under the pressures of occupation, they press on socially, though are limited to each other in this regard. Because of this, all their actions, conversations, and gestures are given more weight, as they represent a larger portion of their meta-society than before. The whole film, in typical Truffaut fashion, plays with this idea of levels, how they relate to each other, and how the people within them act. All in all he's successful in producing an exposé on how societal limitations shape our actions and how art prevails, even in during our darkest hour. Not only do the characters realize that the show must go on but so must their lives.

I have been a fan of The Criterion Collection for quite some time, especially how they handle the restoration of old prints. In this, I was excited and a bit curious to see how they would handle a Blu-ray treatment, and they only half met my expectations. The image itself is far from flawless - scratches and signs of wear are still present despite Criterion's best efforts to cover them up. Detail also seems to depreciate near the edges of the screen but its hardly noticeable, let alone distracting. The picture is grainy, but intentionally so. It's a relatively uniform effect that doesn't worsen in the normally troublesome spots. Faces have a bit of a waxy look to them, though I can't say for sure whether or not this was intentional. The entire image, especially in the interior scenes, has a warm, vibrant quality to it. There is some obvious red filtering but this is intended and expanded on in the extras. Similarly, scenes outside the characters' beloved theater are cooler in an effort to parallel the impending threat of Nazi soldiers. This aesthetic duality is a nice touch, and well represented in Criterion's transfer. Overall, I'm satisfied with their treatment but consider it far from showcase quality.

Another noted aspect of Criterion's releases is their inclusion of supplemental material. With this release, I didn't find the volume of extras to be outstanding but their quality is. The featured interviews are particularly insightful and, despite their short durations, hit all the right notes. Also noteworthy is the inclusion of the little seen short "A Story of Water" which is co-directed by Truffaut and New Wave accomplice Jean-Luc Godard. It exudes whimsy and charm. The film's menu is easily navigated and its notes nicely summarize the spirit of the featurettes. The packaging is sleek and tasteful.