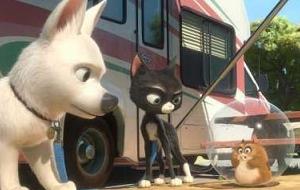 "Way back" in 1995 Toy Story delighted audiences with its imaginative charm and, since then, computer animation has come a long way in terms of popularity and innovation. The readiness of modern technology allows for an increased output of smoother, more uniform pictures. Now, thirteen years post-Toy Story, Disney gives us Bolt, a tale of an oblivious action hero dog and his coming to terms with reality. As in most animated features the film's M.O. again relies heavily on anthropomorphism to demonstrate a perspective that would be difficult to capture with film (Beverly Hills Chihuahua tried this and failed). The theatrical presentation was also shown in increasingly popular 3D though this and the movie's cutesy story weren't enough to challenge the fiscal (or qualitative) success of last year's WALL-E or Kung Fu Panda. Still, Bolt fought its way to a domestic haul of $114 million and peaked at its second week total of 3,654 screens.

The casting of the movie reads as awkward but is not totally unsuccessful when put to practice. Most surprising is John Travolta as our titular mutt, who brings an air of playful curiosity to the role. Less impressive is Miley Cyrus (voicing character Penny) whose smoky voice sounds "off" coming from a girl younger than she is. In the grand scheme of the film, this complaint is minimal; we know she was hired for her name. Penny is Bolt's television costar though a pushy agent and overzealous director - who looks disturbingly like Michael Bay and is voiced by James Lipton - prevent her from treating Bolt like an actual puppy. Their relationship is stifled because he thinks the show is real and appearances must be kept up in order to keep his performances "genuine". After a network executive insists on an unhappy, or rather, cliffhanger ending in which Penny is kidnapped, Bolt escapes his trailer and searches for her. Cue cross-country trek à la Homeward Bound.

Along his journey he meets the supporting players - some major, some minor - all of which have something to teach him about himself. Being targeted towards children, the messages are simple, which is fine though not preferable. The movie is well crafted and creative enough to entertain parents as well though I feel a dichotomy exists in its exploration of theme. There are obvious notes on the treatment of child actors but little is done in addressing the inhumane treatment of their animal counterparts. The main repercussions lie in how Bolt is oblivious to anything off the set. Worse is how forwardly the network producing the show endorses unique endings, yet the finale of the film itself is the same emotionally manipulative "Will the dog make it?" dreck that we've seen countless times before. It's premise celebrates originality but it ultimately sidesteps being original. The film will be enjoyed by children and parents alike, sure, but lacks the layering of other animated spectacles. In this, it's cute and fun and pretty but little else.

Being a modern, animated film, high expectations were set for the quality of Bolt's Blu-ray transfer and they were met, if not exceeded. The image is clear, incredibly so, and an array of detail is on display in both character and background design. The nature of the film provides for demonstrative examples of the format's audio and visual capabilities. Chase scenes and action sequences boom to the point where they're almost overwhelmingly visceral. This is a good thing. If I had a complaint, it would be that the picture could be a bit sharper in order to better exhibit depth within the frame and how characters relate to their backgrounds. Still, this is as minor a qualm as any.

The Blu-ray packaging also includes a DVD and digital copy of the film, a convenient new inclusion on Disney's part.