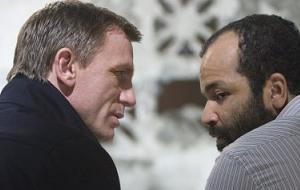 After the success of the franchise rebooting Casino Royale, Bourn...er, Bond is back, this time as seen through the lens of hackneyed director Marc Forster (Stranger than Fiction). Like its predecessor, Quantum of Solace performed well in the US, grossing $168.3 million at a high of 3,501 screens.

I'll concede that the above comparison of Solace to the Bourne films is an overused criticism and here I meant it as more of a joke than a jab. Still, behind every joke there's truth, though my complaints stem from Forster's execution rather than the story's more conceptual elements (which have problems as well). In my review of Happy-Go-Lucky I listed questions I hoped the film would address - ones indicative of thematic layering and existentialism. My viewing of Solace brought on questions as well, though these were a bit less thought provoking. Is Bond's skeleton made from titanium, his skin from Kevlar? Why does everyone but Bond have the marksmanship capabilities of campy B-movie villains? Where's all this fire coming from? How is Bond's sports car able to match the lateral force of a tractor-trailer? I could continue, but won't. Most problems stem from the filmmakers' insistence that the narrative be action-driven when they don't know how to properly do action. Inconsistencies like these could be effectively used to deconstruct the legend of an iconic figure such as Bond, but there's nothing in the film to indicate that this was Forster's intent. His focus seems to be on spectacle and not detail, as if he fails to see what makes a scene special. The action sequences are visceral rushes, sure, but immediately peak in intensity, then try to sustain that level for the rest of the scene; the results of which bore.

As disappointing as the action is, the script also has its problems. Taking a page from other genre efforts, Solace features thinly veiled contemporary concerns in an attempt to pass itself off as relevant. It isn't. The villain Dominic Greene (a terribly misplaced Mathieu Amalric) is a rich environmentalist who conspires to use natural resources as leverage against ailing nations. The dialogue of he and his partners comes off as passive-aggressive political quips more so than actual conversation. He criticizes the dollar, jokes about the value of oil, and casually discusses how easy it is to destabilize governments. The portrayal of America is critical, which is fine, though I take offense to how sloppily it's done; a complaint not of the film's political stance but, again, of its execution. Hopefully the next installment will focus its efforts in more appropriate places, like properly balancing action with content without being overtly serious in tone. Or maybe the gorgeous geographical scenery will be used as something more than backdrops for action. Either way, it has been only one movie since the franchise's reboot and this Bond is already growing stale.

Unlike the actual film, the Blu-ray treatment of Quantum of Solace impresses thoroughly. Despite my distaste for Forster's overdependence on establishment shots, the well-scouted locations look beautiful - especially when sun drenched. A layer of fine grain exists but remains uniform regardless of how the scene is lit, allowing for appreciable, consistent detail across the entire picture. Action scenes, while not being contextually apt, look and sound crisp. In fact, these overdone sequences marry beautifully with BD's capabilities, as if intended for the platform; they're as clear as any wide or still shot. Focal range is also impressive and distant objects seem as complex and real as those in the foreground. Still, the overall look is a natural one, and fits well with the atmosphere of the movie. Audial clarity is also paramount, which makes Solace an example of what a home theatre experience can potentially be.