Apparently, getting this film made was a bit of a burden but backers can take solace in betting on a winner, at least from a cinematic standpoint. While The Wrestler performed modestly at the box office, earning $26.2 million domestically on as many as 754 screens, the buzz surrounding Mickey Rourke's performance should make viewers take interest on DVD, and deservedly so. While the movie won't hit the ground running on the small screen, it should have the legs for long-term cult success. 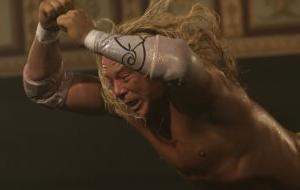 Entertainers entertain. It's a fact, and one writer/director Darren Aronofsky is not only aware of but fascinated with. And, as his latest lead, Randy "The Ram" Robinson (Mickey Rourke), saunters down to the ring to the tune of Guns N' Roses' "Sweet Child of Mine" we, the viewer, can't help but feel for this entertainer of yesteryear. The crowd roars, unaware of his sacrifice. They're focused on the now, and Randy, physically and emotionally worn and torn, gets caught up in it too.

This moment, a filmic highlight of 2008, communicates so much. While ostensibly dealing with professional wrestling, a practice forever associated with artifice, we wonder about cinema, and what implications this film lends to its own medium. This is the beauty of auteur Aronofsky's latest feature: it not only acknowledges the bigger picture its story presents but explores it, and with great depth. The film's photography, acting, and narrative all compliment this, coming together as an ode to those we ask so much of, yet think so little about. At least, that is, in a personal sense.

After doing a picture of high aesthetic concern (The Fountain, which was criminally panned), Aronofsky has pulled his lens back without subverting his growth as a filmmaker. His focus here is not of the visceral but of the person, the actor. Rather than over-extending his already curious camera, Aronofsky puts the weight of his picture on his performers; a bold move that ultimately pays dividends. Marisa Tomei excels in the supporting fame role and Rourke is transcendent. At their core, both characters are performers - he an aging wrestler, she an aging stripper - and both battle internally about how at home they are in the spotlight or, rather, how they manage their double lives. As performing is inherently expressionist, we wonder how much of their personal lives bleed into their professional personas and vice versa.

The narrative itself is wrapped around the twilight of Ram's career and demonstrates a stark contrast between his life in and out of the ring. Inside it, he's a golden-locked superstar, universally beloved by fans, who see him as a hero they can relate to. He's not the biggest wrestler and, in some ways, his "gimmick" lacks the creativity of his peers but at the same time reflects the ideals of working class heroism. However, after a heart attack halts his already piddling career, he turns somewhat introspective. Wrestling again might mean his life but at the same time is what gives his life its balance. Outside the ring he struggles to pay rent, can't make amends with his estranged daughter, and battles with his health. Inside, the roar of the crowd, the lights and tights, everything about the sport pulls him out of reality, away from the outside world and its problems.

In a way, performing is his drug. While he struggles to patch up personal problems he again begins to crave the adoration of his followers, which begs the question of who is responsible for his fate. Of course, the ultimate answer is the individual, but The Wrestler evokes the idea that the fans and industry are also in some ways culpable. Without them, he wouldn't have such a stilted perception of himself, nor would the line between his normal and professional personas be so irreparably blurred. Like the characters of Greek tradition Randy becomes a product of his surroundings and, in eschewing his fate, he ultimately seals it.