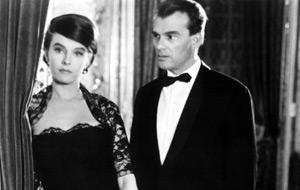 The abridged version of this review would be to simply call the film an achievement. From the standpoint of craft, it's an aesthetic marvel. Evocative, beautiful, and laden with confidence, the vision of auteur Alain Resnais is a sweeping, enigmatic pictorial of the tenets of memory and the impenetrable nature of high-society locales. Narratively, Marienbad is as mysterious as its images are striking, bringing elation to some, headaches to others, and confusion to almost all. It stands as both a viscerally stirring and intellectually stimulating piece, provided the viewer gives it a fair shake-a task labeled as trying, though such efforts are not unrewarded. To summarize, it's not only an experience but a worthy one.

The picture's opening is demonstrative of the preternatural tone that is to follow. Navigating through the hollowed corridors of a ghostly mansion, Resnais' lens explores vacant openings and tight niches, moving weightless and rhythmic while a repetitious voiceover describes its baroque styling. The voice heard is stoically stated and at times drowned out by the unidentifiable drones of a straining organ. The feeling of it all calls to mind that of a haunted house, but without cheap scares and otherworldly figures. This is a world of human fear, fear that results from regiment-both social and cinematic.

The voiceover soon ends, as does a play that the hotel's patrons were attending. They then dance and converse, though their movements are trivial and their words meaningless. Time starts and stops. The well-dressed crowd continues about their mechanical banalities that appear devoid of emotion and reaction. They interact, of course, but in questioning whether or not they truly exist like this or are exercising rote; one must side with the latter. Nothing is learned by or about this group, which tells of how they're closer to props than characters-they perpetuate the tone and anchor the film's setting but aren't relevant in an interactive sense. In a word, they're cogs.

Three characters play as the exception to this rule and they can be described as follows: a woman, her husband and her supposed lover from a past outing (they are known as A, M and X respectively). In the narrative's most basic sense, X seeks to remind A about their affair from last year in hopes she'll leave her husband and escape this emotionally distant culture-this much is certain, what isn't is the reality of it all. The picture is one of contradiction between what is presented and what its Truth is. Watching the film for the third time, I felt as if somewhere beneath the lavish décor and puzzling timeline, everything made sense. This isn't to say I understand the film as intended, far from it, but the presentation of the story seems to be a play on the variability and/or repression of human memory. Resnais seems to pass what could be a straightforward tale through some sort of ghostly, atypical filter and we are given only what results. In this, it becomes the viewer's responsibility to interpret this transformation and what it allots the characters and themes.

Throughout Marienbad, X attempts to woo A by recollecting the moments they shared together, though she remembers little and admits to even less. He describes their encounters in great detail and his words carry a certain air of poeticism, yet she denies it all, laughing him off. At times we are shown his vision, which Resnais presents with a flighty camera and obvious notes of romanticism, but it still amounts to his word against hers; his memory against hers. X talks of how they once stood and debated the meaning of a gesturing statue, a discussion of meta-art that caters to the idea that, although art reflects life, we often want our lives to reflect art.

The character M is also important, though his screen time and dialogue are limited. While the love-story necessary to the film's existence is the result of interaction between X and A, M represents a restrictive force that limits their potentially reckless passion. Tall, dark and exacting in speech, M is a superb strategist and gamesman; his presence reflects his surroundings-formal, mystifying, and detached. He plays table games with other patrons and wins every time, calmly and without effort. The world the film exists within seems to be under his control or at least at his discretion and his game parallels one Resnais is playing with cinema. It is M's word that ultimately ends the debate on the aforementioned statue, which strips the carving of its mystique. Perhaps this embraces that which is inexplicably moving or, better yet, champions the importance of artistic analysis, especially in the ambiguous. Before the statue is explained, the lovelorn X saw it as a symbol of his relation to A. Now it's merely stone. In this, X seems to question his own perspective, which causes the ambling narrative to stray even further off the beaten path. This enables a conflict in his conscience, as he can no longer work out the details of his affair with any certainty. His memory-his link to the past-seems unreliable. Thus, he cannot trust his actions or his perception of others-as disorienting a scenario as any. A narrative shift later shows A's perspective (or what she can recollect) and clues to violence and rape become suddenly of concern, playing with how the viewer sees these characters. We now question what is Good and Right, even if our minds were already made up about who is what.

This is a difficult film. Answers do not come, even to those who wait patiently for them. For all we know the characters may not actually be alive. Instead of knowingly separating our own reality from the picture, I hypothesize that our best option in understanding it is to place ourselves within its world. By attempting to know the tragedy of fleeting memory, romanticized expectations, and how surroundings so evocatively reflect the perceived self, I've come to see the film on a more personable level. To experience Marienbad is to experience a dream that manages to capture the necessities of one's essence. Naturally, this interpretation is far from definitive but the reason I, amongst others, have come to love it.

As complex as Marienbad is in terms of concept and story, its visual language is of equal importance and Criterion has once again outdone themselves in maintaining the film's most intricate aesthetic concerns. Shot in black and white in a style that recollects Antonioni, the photography is actually an expressive wonder in and of itself. To properly convey variable levels of shadow and light, much care went in to the mechanics of creating a shot and, thankfully, this information is not lost on the new BD print. The image is wonderfully textured and showcases the full array of the ornamentation present in German castles in which it was shot. The camera wanders about the halls and parlors of these settings, showcasing detail that's undistorted regardless of its place within the frame or the rate at which kinesis occurs. In order to accomplish this, Resnais and DP Sacha Vierny (whose resume also impresses) utilized split lenses to frame the shadowless faces of the cast at varying depths but with equal focus. This is a practical effect that, through optical trickery, allows distant objects to behold the clarity of foreground ones. With Criterion's Blu-ray treatment, this effect is preserved quite exquisitely. Scratches and the like are well covered and sparsely recognizable and the entire image is free of the green tint that seems to populate older, poorer transfers. This is the treatment the film deserves.

Admittedly, the fact that this film was finally given an apt American release makes it hard to complain about anything that accompanies it. Still, though I like the cover for its understated clarity, its not one of the more beautiful or communicative designs that we've seen from Criterion. Nonetheless, it rings pure in its simplicity and adequately reflects the ghostlike nature of Resnais' film. Inside the slip cover is a more decorated casing that features some of the picture's more impressive imagery and a booklet of essays, as to aide the viewer in their own immersion into the work and their subsequent interpretation of it.

The extras serve to uncover some of the more mechanical mysteries of the picture and also to shed light as to the goings on of the characters and their motives. The "making of" documentary is insightful without overextending itself. This feature focuses primarily on the level of craft, though statements regarding how these formal qualities affect the picture's themes are also sprinkled in. More inclusive is the commentary by scholar Ginette Vincendeau, who does well in relating the work to movements like the French New Wave and post-modernism and how these differ from what Resnais set out to accomplish. Through it all, the picture's enigmatic feel remains, as these featurettes in no way jeopardize the oddly whimsical feel of the film by way of overly explanation. This is one of the better releases of the year and belongs on any cinephile's shelf.