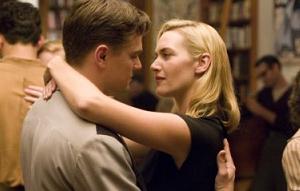 Jack and Rose they ain't, but for the first time in over 10 years Kate Winslet and Leonardo DiCaprio not only share the screen, but again act as a couple. In Revolutionary Road the pair plays the wedded Wheelers, an ostensibly ideal couple that so perfectly fits the 1950's suburban mold. Though I was initially curious as to how Brit born Sam Mendes would handle material smeared with Americana, any concerns I had soon subsided. The film may take place in Connecticut and may have the aesthetic of a Norman Rockwell painting with fences freshly whitewashed by Tom Sawyer himself, but its message is universal. Its appeal, however, is not. Road underperformed amongst other awards season favorites, and its $22.8 million gross also marks the lowest of Mendes' directorial career. A shame really, as I see it as a return to form after the wayward Jarhead.

In the most basic sense, the film is about pleasure-a study of our expectations of it, and how the pleasure of one person affects another. Though a simple concept to grasp, Mendes does well in layering this theme throughout his picture, inserting worthwhile ideas beneath the decidedly suburban veneer. Concerns of the middle-class lifestyle and its built-in trappings remain, though these notions are largely secondary. There's little left to be said of the cultural landscape of fifties suburbia and even less that's actually relevant. Instead of tempting to dive into exhausted themes, Mendes wisely opts to use these pitfalls (and the complacency that results from them) as a means to say something grander about the role of women in rigid social structures.

Frank and April Wheeler-DiCaprio and Winslet respectively-embody the typical postwar couple. A prologue shows the two chatting it up at a party and soon after they're married, have two children and, of course, a lovely white house-the American dream come to life. Troubles begin when the two begin to think independently, both of each other and of their current situation. Frank lacks a sense of purpose, smiling his way through work and social pleasantries in order to put on the air of someone who has it all. April's plight is similar. Tired of being the homemaker personified, she yearns for an escape. Her ideas are those of a woman who has lost herself to conformity. Out of desperation she talks Frank into moving to Paris where people "are alive". By plan, this sabbatical from society would subvert their normal routines, leaving Frank at home while April provides for the family. Alas, things go awry when April falls pregnant, making the baby she carries just another roadblock of upward mobility.

Perhaps the picture's greatest strength is its subtlety. Its ideas are accessible mainly through inference as opposed to stating them outwardly-an all too common practice these days. The film could likely stand on its own as an actors' piece but it's Mendes' championing of feminist concerns that makes the movie what it is. As Frank seeks physical comfort in the outlets a man of his status is afforded, April deals with her burden internally; her personality is smothered by surroundings that don't allow her a release. Naturally, her struggle affects others, especially Frank who learns to recognize his wife's perspective all too late. The picture isn't so much a commentary on contemporary concerns but a unique look into problems of the past-ones that can be avoided in a modern setting thanks to the headway women have made culturally and politically. Still, there's few things are as tragic as seeing a strong individual smothered by things outside their control. The film effectively demonstrates this.

The camerawork of celebrated lensman Roger Deakins paints a glossy portrait of an era gone, but not forgotten. Though we still tempt to emulate the superficialities of such times, we could never reproduce the detailed post-modern ornamentation that design team Kristi Zea and Debra Schutt have reconstructed. Deakins shoots these locations and sets with deep focuses and a cautiously wandering lens, which translates well to the Blu-ray format. The digital intermediate format only helps this transition. Overall, the image is clear and distinct and looks to be an accurate representation of Road's theatrical release. My only complaint would be that skin tones look a bit warmer than they should, though this doesn't seem to be the case with the fair-skinned Winslet. The rest of the cast seems to have fallen victim to artificial tanning, though this may be intentional, serving to represent the artifice that's so consumed our characters' lives. Other colors, particularly greens and yellows and whites, look brilliant. Blacks are also deep and rich with no sign of digital noise reduction or excessive grain. Between the stunning work of Deakins, the realized art/set design, and the digital intermediate processing, Revolutionary Road excellently represents BD capabilities, even if the color timing appears somewhat off at times. Its complexity, both visual and thematic, makes this release worthy of anyone's time.