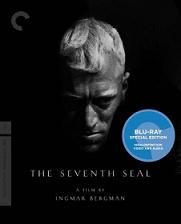 Whenever asked by someone new to Ingmar Bergman as to where they should begin his filmography, I generally answer: The Seventh Seal. It dutifully serves as an introduction to the most cherished, introspective themes of his early films while showcasing filmic language as he understood it. For those wondering, yes, The Seventh Seal is my favorite work from the Swedish master, though that isn't to say others-Fanny and Alexander, The Virgin Spring and Autumn Sonata-aren't equally important. What draws me to this picture above others is the complexity of its layered narrative and the subtle thoroughness of its thematic exploration. The cinematic world Bergman creates is an expansive one, and the film has a scope to match.

A common practice in movies as ideologically based as this is to create physical constructs of ideas and call them characters, a notion Bergman formally rejects. Instead of having his actors play one-dimensional sounding boards, Bergman transplants pre-developed characters into a grim situation and serves up a reactionary exposé on mankind in its most fragile state. There's a mysterious sense that these individuals existed prior to the movie's opening, as if we the viewer are merely given a cursory glance into their long-lived lives. Of course, such a movement is often attempted but rarely executed with the depth, precision and reference seen here. This notion translates to characters existing within a believable world; making their needs feel dire and their jokes reflective.

The story is set during a time when the Black Plague stretched across Europe, casting a wave of death from the shores to the forests. Crusaders amble home only to find their world transformed by God-fearing repenters who flagellate themselves and acting troupes who profit from distraction. Max von Sydow plays one such crusader by the name of Antonius Block who, along with his squire Jöns (Gunnar Björnstrand), traverses across the countryside whilst observing the omnipresence of death. To them, God is now but an abstract notion, as they have little memory of His grace-the only physical reminder of His presence is the gnarled, wooden iconography of local churches. The world Block and Jöns inhabit is one that must come to terms with its mortality, which proves to be a contradictory notion for Block, who had spent the prior ten years fending off death. Upon washing up on the shore at the film's opening, a physical representation of Death appears, claiming his time is nigh. His fight in the crusades was for Christianity and he now feels betrayed by his faith. To combat this, Block (being a born fighter/strategist) challenges Death (Bengt Ekerot) to a game of chess, a challenge he happily accepts. He can't be beat and he knows this.

What the game actually affords Block is not a chance to renew his life but to prolong the inevitable. He talks of reaching his wife before meeting his end, though the reality is that he's afraid of coming to terms with the fragility of his flesh. Though an introspective notion of one character, Bergman uses this to convey mankind's weariness in accepting the facts concerning life and our collective willingness to barter endlessly to extend it. Instead of reflecting on his accomplishments and purpose, Block thinks only of an impossible future, thus diluting his final days.

Supporting players must also come to terms with fate, as the idea of avoiding death is not specific to the doomed crusader. The world is afraid of dying, as was Bergman when making this picture. In this, The Seventh Seal is an exercise in catharsis for the artist and spectator alike, illustrating the more hopeful notions of a grim subject-evident especially in its conclusion. Black comedy is laced throughout a narrative that tells of the extremes people go to in addressing their most insane fears. Ultimately this serves to add an air of lightness to the picture and to our association with its characters, making it easier for us, and them, to finally let go.

The new Blu-ray transfer from Criterion is impressive and shows a marked improvement over their first DVD release of the movie. The image is a much cleaner representation of Bergman's original picture and is devoid of heavy scratches and artifacts (naturally some remain). Being a film from the 1950's, matters of aptly storing and cleaning the prints are essential in providing an adequate version of the artist's vision, as advanced cinematographic processes were non-existent. Many outdoor scenes are noticeably darker, ridding the image of the slightly washed out look prior transfers exhibited. The movie is a subtle one and its grey-scaled color palette now shows complexity and detail where voids of darkness and light previously reigned. Backgrounds now appear more convincingly relative to the foreground figures that inhabit them, providing viewers with the depth of frame that was initially intended. Kinetic shots show no blurring around edges and the performances of the facially-expressive cast can now be appreciated even more. Though the image won't impress the way newer releases do, this is likely to become known as the definitive edition of The Seventh Seal.

The extra features are what one would expect from Criterion-insightful, exacting, and original. Despite having a read many interviews of the man, the feature-length documentary "Bergman's Island" proved interesting and touching. Appropriately enough, learning about the artist through his preferred medium only adds weight and emotion to his words and anecdotes. There's a certain air about him when he talks, an air derived from his cautious inflection and personable face. Seeing where he lived and how these detached, stoic surroundings pertain to his art make this extra an essential watch for Bergman aficionados.

Though the original packaging is somewhat of a beloved icon within the Criterion catalog, I find the new cover art to better reflect Block's internal struggle. The clear plastic case is also a nice touch, as it adds durability unforeseen in their previous BD releases. A booklet features an eloquent essay complete with pages of images that showcase the film's most iconic moments.

The improved subtitle track also allows viewers to appreciate the complexity of Bergman's language and of the humor that is often missed.