2 or 3 Things I Know About Her

When reflecting on 1960's cinema, the name Jean-Luc Godard is an unavoidable presence. One of the most revered directors of all time, Godard left an unmistakable mark on the filmic community during that decade-a time that saw his most enduring works come to life. Other prominent names come to mind when recollecting the sixties' best, though none possessed the versatility, intellectualism, and blatant disregard for convention that Godard bestowed upon his films. Somehow amidst the important directors of the era-Bergman exquisitely channeling the raw power of female emotion and existential doubt; Antonioni expertly crafting observations of social malaise; Bresson leaving viewers in tears; Kubrick leaving viewers in wonderment-Godard still made his mark. The man had a knack for the vogue, from fashion to film, and was full of questions regarding their validity. This is not to say he was in complete disagreement with all things pop-culture, as his films clearly imply an understanding of their importance. Still, Godard's social consciousness and inherent need to pry at things make his films as insightful as they are curious. "Smug" is a word readily applied to him, or at least the attitudes his movies exude. 2 or 3 Things I Know About Her is one such work. 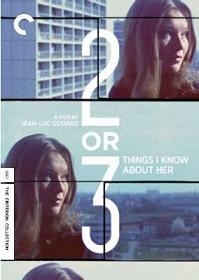 In its most stripped-down state, 2 or 3 Things is about language, more specifically how language-which is regionally specific-seems insufficient in describing the human experience. In some ways it's a celebration of the senses, though in some ways all of Godard's films work on this level-just to different extents. However, this is an artist at his most straightforwardly expressive which is why, in turn, this effort is unlike even his others. The narrative is largely built from monologues and quotations. By way of his ever-progressing experimentation, Godard has turned in something closer to an essay than a movie or, rather, what we typically define a movie as being. As our narrator (Jean-Luc himself) whispers in our ears "secrets" regarding the industrialization of Paris (subjects/criticisms too taboo for other directors), his "actors" answer candid questions regarding the social and moral shift of the area. It's a dense, jumpy-yet-rhythmic work. Typical Parisians are photographed doing typical Parisian things while larger, broader themes swim about. Brecht is quoted early by the female lead (Marina Vlady), clueing the viewer in to just how romantically detached the picture will be. Our narrator takes this one step further, introducing her as an actress and foretelling her movements and gestures. The fourth-wall is broken-we've entered Godard's world now.

The "Her" of the title is not your typical Godard heroine but Paris herself. The city was in the midst of an economic and industrial boom and progress seemed assured. However, instead of taking this change in stride, Godard was intent on questioning what will result from such a sudden cultural convergence. He had already explored the effects of Coca-Colonization, communal sex, and distant perspectives in his masterpiece Masculine Feminine, but the scale of that film was more personable and succinct. Here he examines the individual facets of society and explicitly worries and hypothesizes about what will result.

The ever-photogenic Paris has been a marquee of cinematic spectacle for quite some time due to its rich history and romantic air. In 2 or 3 Things Godard eschews this ideology and instead photographs cold, lifeless snippets of construction sites, which symbolize an uprooting of the city's tradition, as well as an uprooting of cinematic formula. Godard had already done the latter for years and his works generally talk of a disinterest in following standards. Still, there's a certain beauty in how even a steel-beamed skyline looks through his lens. Antonioni had painted a similarly striking and equally forewarning picture in his The Red Desert, though that dealt more with more individual introspection and less with political and social cause-effect. In short, it's as much about character as environment while Godard's film is more rooted in its specificity. He plays with words and language in ways that non-native viewers can only hope to understand. The fact is we can't, as his filmic language is as complex as any dialect and ideas are bound to be lost in translation. Through this, his call-to-arms about a city whose freedom is waning is as experiential as it is intellectual. We cannot hope to understand every ideological note, but we can experience it and reflect these thoughts on the ever-changing social and moral codes that outline our lives. This is Godard at arm's length, yet his frustration continues to show through. The picture is a deconstruction of what he feels has gone wrong with his beloved Paris, namely the confusion that results from the quasi-evil necessity of language, which, as Godard states, turns people into accidental prostitutes-both literally and mentally. This ode to sensual expressionism is in stark contrast to the self-perpetuated intellectualism of the film itself, but I doubt this juxtaposition was unintended. If nothing else, Godard was two things: interesting and exacting. 2 or 3 Things I Know About Her only serves to further confirm this; it's a sumptuous meal of mind and matter. Bon appétit.

The extras that accompany the film are fairly standard stuff from Criterion, at least by their lofty standards. In this, the release is already better than the vast majority of what hits store shelves these days and is well suited for those of us who are Godard enthusiasts. The supplements are insightful looks-mostly in interview form-at the director's work, focusing not only on this project, but during the late sixties as a whole. We learn of his approach as an artist and how the stress that being labeled as "great" caused him. All featurettes are concise, insightful looks into the mind of one of history's most cleverly complicated filmmakers; not a minute is wasted and nothing reads as filler. The packaging continues in the vein of Criterion's release of Pierrot le fou (which they plan on releasing on Blu-ray on September 22). Personally, I like the congruence, as Godard's films always emit a unique feel, which Criterion replicates well physically.