Jean-Luc Godard's career in the 1960's was as taxing as it was inspired. From his debut Breathless up until the polarizing Week End, the French auteur's filmography was a constant reinvention of cinema and self. Always noticeably personable, the ideas and images seen onscreen often centered on where people find themselves socially, something Godard was unendingly concerned with himself. His pictures from this period were genuinely political at times, but never without a flair for the self-aware. These films are full of reference to all things art and contain more brain food in the first reel than most movies do in their entireties. Made in U.S.A. was made at an interesting time in this regard, as Godard was on the brink of subverting his movie-movies motif. His narratives, this included, became more chaotic, sporadic, and somewhat obtrusive. More importantly, Made in U.S.A. features the final collaboration between Godard and his ex-wife/starlet Anna Karina. In this, the film feels as telling of his continued longing for her as it does of its intended political subtext and, above all else, reads as a fitting au voir to her and to his "old" way of filmmaking. 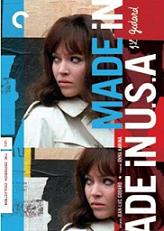 With a story loosely spun from old noir strings, Made in U.S.A. bares little physical resemblance to the genre it's so commonly associated with. For starters, the private eye protagonist is a woman-played by Karina-who aims to solve and avenge her lover's death. Viscerally, the film is pure Godard. He plays with the vibrancy of colors, frames actors on blank walls to channel a faux-studio look, intercuts comic drawings with real-life action, uses mock-violence, and toys with sound levels. The result is somewhat scattershot, but without sacrificing its poetically poppy aesthetic. It manages to be funny when it needs to, particularly in its more cartoony moments, which celebrate the befallen art of physical comedy. Even as a female detective, Karina is not immune to dealing with typical (or atypical as the case here may be) noir-thuggery and muscling. Still, such violence is never tasteless or in any way brutal. Being as infatuated with Karina as he still was, Godard treated her character with a sense of reverence. The picture is commandingly hers and an excess amount of close-ups of her face fills each frame with a feeling of longing, as if the camera was intent on becoming lost in her gaze. With this, I felt Godard's pain and sense of withdrawal from a woman who had been such a large part of his life and career. Her character is strong, smart, striking, and chic. She uses verbal trickery to confuse her male counterparts and gradually learns throughout the picture to become independent of them. U.S.A. is filled with allegories and metaphors but none as rich as his own send off to his most beloved star.

As was his M.O. at the time, Godard interlaced his picture with a plethora of quotations and references from high literature to pulp fiction. His appreciation for the expressive is evident throughout the film, even if most (if not all) viewers will miss most of these nods. I find that, although interesting, the majority of these references seem to be in the form of kudos, rather than being used to communicate broader concerns as he so often did. That isn't to say the picture is hollow-as its political and anti-consumerism markings are easily identifiable-but it feels more tangentially essayist and piecemeal than his other works; reference for the sake of reference. Still, this is Godard in rare form, as we get to see his most personal longings put to film. Objects still dance in his camera's periphery, but Karina dominates the frame as she dominated his mind. It is clear this was a difficult film to make, yet there's still an odd joy that encapsulates the picture. Perhaps Godard's trademarked zaniness kept the film from feeling too sad or perhaps it resulted from his sadness. Either way, this piece is as revealing of the director himself as it is of his characters, which, for my money, is damn interesting in its own right.

Similar to its sister release 2 or 3 Things I Know About Her, Criterion continues to set the standard for what a one-disc release should be. Likewise, the extras exist in interview and short-documentary form and offer touching, funny, and in some ways tragic looks into the mind and turmoil of Godard in the late-sixties. A recent interview with Anna Karina is particularly moving at times, as it allows viewers to put the pair's genius aside and see them as the people they were and are. The menus are, as usual, easily manageable and clear.