High school's a terribly awkward time for a teenager, between all the hormonal changes and social difficulties that await you as you navigate the treacherous halls from class to class. The premise of 17 Again supposes that a second chance at high school, after you've lived the adult life, would be a valuable tool for teaching you life-lessons and helping you rekindle your love for your soon-to-be-but-maybe-not ex-wife. There's apparently little room for the finer details of plausibility and common sense in this family-oriented feature, and apparently they were unneeded. The $64 million in domestic grosses the film made seems to indicate audiences had some appreciation for this fairy tale flick, whatever its flaws may be. 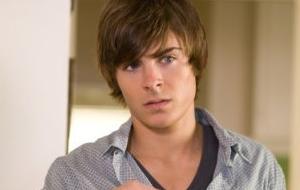 After watching his family slowly slip from his fingers, the stuck-in-a-rut Mike O'Donnell (the adult version played by Matthew Perry) finds a chance to do things differently after a slightly creepy janitor (the underused Brian Doyle-Murray) leads O'Donnell through a convenient magic time portal that transforms him into his former 17-year-old self (Zac Efron). The confused man-child then realizes his chance at setting right the wrongs that have befallen his family, and in the process learns to accept his choices in life.

While Efron does an acceptable job at imitating a man in a kid's body, it's difficult to completely give in to the illusion, as the character of O'Donnell maintains his immaturity even through his supposed epiphanies and changes of attitude. Stealing the show is Thomas Lennon as O'Donnell's geek-buddy Ned. Lennon takes the role and transforms it into a perfect vehicle to shine amidst mediocrity, getting all the best laughs as he relentlessly pursues the school's attractive principal in a subplot whose level of interest rivals that of the main. Playing O'Donnell's wife, Leslie Mann disappears into the background from scene to scene, having nowhere to go with a character chained down by cliché and poor development.

This newest teen-oriented project comes up pretty short on substance, but does the best with what is there, offering families a moderately enjoyable parable film that goes for good laughs and heart-warming pleasantries, despite its unending succession of awkward, forehead-slapping moments of stupidity. That might be all that Efron needs out of this film for his career, setting himself up as a capable young star that can effectively handle comedies built for teenage audiences. Still, all throughout I kept thinking 17 Again could have benefited from cutting fewer scenes ripped off from Back to the Future and instead went for a more satirical angle on the pressures of high school, a la Clueless. It definitely doesn't break any ground or try any new tricks, so in the end you just feel like you're watching nothing but a rehash of past films that already used this premise with far greater results.