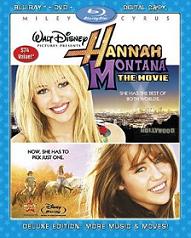 In a twisted, kind of ironic way, this movie makes sense. Hannah Montana-alter ego of singer Miley Cyrus that's undoubtedly the brain child of a top-notch marketing team-is little more than a conglomerate of her predecessors. This isn't to call her an outright phony, but that really is the basis of her act-that despite her fortune and celebrity she's really just a down-to-Earth country girl. In this, she blends pop-rock with country twang to appeal to a broader, more demographically encompassing fan base (and it's workin', folks). Her movie follows a similar formula. By taking tired comic gags and token montage exposition, Hannah Montana: The Movie reads as an over glued collage of recycled comedic scraps. Naturally, there's an audience for that kind of thing, especially when the Chastity Princess herself is the film's subject. Though her fans didn't come out in legions as they did for her concert movie, Hannah still grossed $79.6 million on as many as 3,231 screens.

The plot of the movie is little more than a bubble-gummy reflection of Cyrus's life and career-an emotionally neutered pictorial that's as disjointed as it is lazy. Aside from the obvious identity conflict-which paints silly generalizations concerning both urban and rural lifestyles-Hannah is a vacuous pop culture vessel that dodges conflict. The film also falls short of its purpose as a treatise on purity for adolescent girls by showcasing a world that's virtually unrelatable. The film will resonate with fans not because it recalls their own woes, but because of the lead's name. One of the most insipid films I've seen as of late, even by younger audiences' standards.

Displaying the shoot-by-numbers cinematography of David Hennings (of You Got Served fame) is an almost undeservingly capable Blu-ray transfer from Disney. Clear distinctions can be made between the even-more-fake-looking-than-usual Los Angeles backdrop of Hannah and the bluegrass locales of Miley's "real" life. The array of hues in some colors, particularly in greens and browns, is impressive. Grain and noise is light and fairly consistent, and the amount of detail present is above average. Disney continues to put out a quality product, even if their track record for filmic quality has been spotty as of late.