In South Central Los Angeles in 1992, destruction gave way to life. Following the announcement of the infamous Rodney King Verdict, the city was, in effect, shut down for days and, amongst the chaos, a fourteen acre lot was desecrated-leveled by those who felt the government was not demonstrating the collective fairness it should. In short, it was labeled a racist institution. In a gesture that could ostensibly look like too little too late, the city approved the cultivation of the site by a small, predominantly Latino community, who farmed the land as if it were sacred and raised generations alongside crops. Despite the triumphs of unity and cooperative will, the South Central Farmers were met with eviction notices in 2006; Documentarian Scott Hamilton Kennedy recorded their struggle. The Garden saw little in way of a theatrical release, which maxed out on four screens and grossed only $23,820. Though very much under the radar, it was still nominated by the Academy for Best Documentary in 2008. 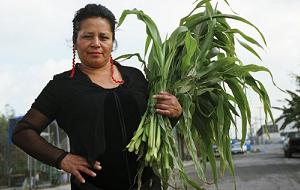 The beauty of Kennedy's film is in its simplicity. Rather than dilute his picture with third-party existential musings, he acts as an observer-one aware of the sociopolitical implications that such a story affords. The South Central Farmers and their supporters are an eclectic mix of people, all of whom bring different cultural and practical assets to this meta-community. Opening scenes introduce us to the main players of the story without an air of pretense or judgment and, in so being, create a considerate distancing between subject and audience. In this, inference is of the essence for viewers, as they're not being told what to think of others. The reality of the situation is complex and gender, race, and class issues are all brought to the forefront without the aid of an artificial catalyst. We're asked to see and interpret their world from their perspective. Even the garden itself, so lauded and celebrated amongst the community, is far from what most would call conventionally beautiful. By portraying the land as it stood (minor lens flares and light haloing aside) we begin seeing that beauty is there-it's just in need of context. In and of itself, the South Central Farm is hardly a visual charmer, yet it's people and their connection to it give the garden a certain something; je ne sais quoi, if you will. The farmer's connection to the land wasn't born from the idea of creating an alluring work of art but from feeding their families while operating outside typical bureaucratic constraints. Similarly, Kennedy allows them to exist freely within their struggle rather than guiding their hand or manipulating their cause. "Fly on the wall" seems like a fitting description of his approach, and it's wholly evocative here.

Though the South Central residents had been working the land from 1994 to 2006 (over 350 families were then involved) real life super villain Ralph Horowitz decided to ax the garden. Horowitz is a land owner and, in this story, a capitalistic threat to an otherwise thriving socialist commune. This isn't to say the picture champions the tenets of socialism but it does suggest an unfair distribution of power between people and government. Kennedy (again) wisely side steps being obtrusive in this struggle, painting both sides as valid rather than reducing them to being merely good/evil. Naturally, as the law gets involved things begin to complicate and lawyers, politicians, and actors are all paraded through an endless gauntlet of bureaucratic bric-a-brac. The results of the subsequent trials and demonstrations can be researched but I'd recommend letting Kennedy or, rather, his subjects tell you of the outcome. Their tale is told through a perspective that's important in its earnestness and to see it is to be humbled.