The latest addition to the Joe Wright oeuvre is disappointing to say the least. Though not the mess that some claim it to be, The Soloist lacks the concern of Wright's prior films (Pride & Prejudice, Atonement) and ultimately plays as a visually ambitious failure. Even the newly recruited star-power-in the form of Robert Downey Jr. and Jamie Foxx-couldn't overcome the picture's by rote thematic implications or even financially justify the film's existence. Pairing a picture as ostensibly Oscar-baity as this with an April release date seemed odd; a notion only confirmed by box office returns. Soloist played at as many as 2,090 locations but only managed to gross $31.6 million domestically. 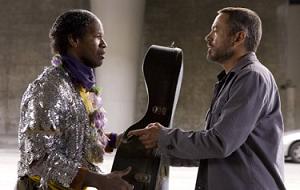 In all honesty, both Foxx and Downey Jr. are dispensable here-the real star is Wright's vision as seen through DP Seamus McGarvey's lens. The camera exhibits spatial understanding as well as anything else released this year and the resulting imagery is far more evocative than the film's dialogue. In this, a chasm exists between craft and human connection. I find this gap particularly interesting, as the story is heavily dependent on the ideology of creation/expression yet, aside from a few piddling observations, says little of insight on the topic.

Our two leads play artists-Nathaniel Ayers (Foxx) a homeless, schizophrenic musician and Steve Lopez (Downey Jr.) a journalist. Though on opposite ends of the expressionist spectrum, they strike up an odd bond that results from Lopez's fascination with Ayers' ability and condition. The two don't seem mutually exclusive, as Wright attempts to illustrate the often-discussed link between genius and mental instability. Ayers sees music (and life) in a way incomprehensible to Lopez, whose perception is grounded by normality-his column for the LA Times (as portrayed) is usually observations on city life. In this, his piece on Ayers is an illuminating experience. Lopez's visits to Skid Row showcase a world the middle-class so often avoids, which affords the movie a chance to evoke political issues concerning the treatment of the poor and the availability of health care. These notions are graciously welcomed, but sadly trivialized by the lack of subtlety exhibited in addressing them.

Over time a genuine connection between the two forms, one built on curiosity and frustration. The fact is that the two exist in different realms despite their mutual passion for creating but, unfortunately, neither of these realms are wholly realized and the script awkwardly conjures up concepts that don't match Wright's aesthetic intricacy. Oftentimes people will remark that the sign of a truly great movie is one that can be watched while muted, though Soloist may actually be preferable this way. This is not a good thing, nor is this a good film.