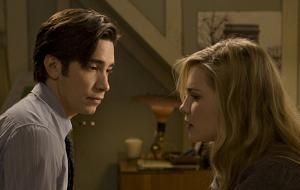 Director Sam Raimi returns to his horror-comedy roots with an orally fixated revelry of mock-schlock (and shock!) tactics that he appropriately dubbed Drag Me to Hell. In and of itself, the title carries a severe tone but when coupled with the film's arrant antics its tongue-in-cheek side shines through and invites viewers into a world of cinematic tomfoolery. While this brand of gross-out capering lacks the built-in audience of Raimi's Spider-Man trilogy, audiences were fairly warm to the idea of Hell. The movie went on to gross just over $42 million on a peak of 2,510 screens and methinks it'll play well to the home theater crowd. Though the inborn interaction of crowded auditoriums may be lost amongst living room settings, Hell possess enough cult-classic panache to cement its popularity amongst genre enthusiasts.

The film chronicles the misadventures of Christine Brown (Alison Lohman), a good-natured farm girl who's now eschewing her roots in order to secure a more normative life as a desk-jockeying suburbanite. Her formerly fat body and accented tongue have been scrupulously modified to "fit the mold," so to speak. By and large, she enjoys what her life has become, as evident by her relationship with supportive boyfriend Clay (the likable Justin Long). Working a menial bank job and in search of a menial bank promotion, she mistakenly refuses an old gypsy financial assistance. By succumbing to the pressures of upward mobility, Christine cast aside her usual meekness for status gain; hardly a damning offense, at least in most cases. As luck would have it, the gypsy puts a curse on Christine, whose soul assumes full culpability for the gypsy's financial incompetence and unbending pride. According to a seer, in three days time she will be, as the title suggests, dragged to Hell.

Raimi's picture is a justly realized portrait of faux-horror stylization, more so than a reflection of our world. In fact, concerns addressing human empathy in financially unstable times are present but purposefully undermined in order to create a work of rhythmically punctuated fun. Raimi's film doesn't intend to actually scare, for real fright would jeopardize the picture's comedic function. Instead, jump-inducing shocks make up the film's frontline of fear, which is strangely complimented by the oral obsession of its comedy. Character's mouths are of constant attention, as most gags revolve around the goings in and comings out of the orifice in question. In this, Raimi's film works somewhat as an antithesis of contemporary toilet humor. Jokes revel in the notion of the mouth being part of the face, which is specifically evident in how absurdist expressions are documented. Comedic cohesion aside, the picture is a bit economical in way of ambition. Those familiar with Raimi's filmography are fully aware of his capabilities as both a storyteller and a technician but little (crassness aside) surprises. This isn't necessarily a bad thing-fans get more or less exactly what they expect-but it's not a very good thing either. It's more of a "fun" thing, though I'd venture to guess that Raimi and his fans are okay with that.

Though the film is formally competent, I wouldn't call its visuals outstanding. Aside from the digital effects, Raimi's picture mostly plays to its natural elements, allowing objects and environment to look believably consistent. I find that the Universal BD does well in representing this, even though the grain structure is uncharacteristically light by Blu-ray standards. While this allows for an effective evocation of tone and mood (particularly in interior scenes, which tend to favor certain hues), I feel that more detail should be present. Not to be mistaken; I do think the image transfer is good, but not as comparatively dominant as most new releases are.

On the other hand, the audio tracks certainly impress. By highlighting the eeriness of the everyday, viewers are challenged to presuppose what is and isn't a construct of Christine's haunted mind, which in turn makes our thwarted expectations all the more exciting. The out-of-nowhere shrieks that populate the film's more horrifying moments do well in developing a certain visceral command over its audience, and the clarity of these elements are represented in crisp, distinct fashion. For those looking to fully experience Hell, especially audiophiles, I would say that the BD is the essential translation.