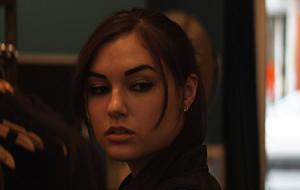 The filmography of Steven Soderbergh is one of contrast and is punctuated-almost symmetrically-with a mix of both high-appeal and low-key releases, some of which look awkward when juxtaposed (take the Ocean's trilogy and Bubble for instance). The Girlfriend Experience is decidedly a small effort, one that concerns itself with the looming air of economic uncertainty proceeding 2008's presidential elections. More specifically, the film deals with the coping mechanisms people employ when shadowed by anxiety. Adult entertainer Sasha Grey makes her feature film debut as Chelsea, a call girl whose clientele almost exclusively consists of wealthy business men and the Manhattan elite. Perhaps in a perfect world, producers would be willing to back soft-spoken, socially conscious films starring porn stars but, unfortunately, we do not live in such a world. Only peaking at a high of 48 screens nationwide, it's no surprise that Girlfriend Experience only grossed $695,417 during its theatrical run.

The title itself actually refers to the unique services provide by protagonist Chelsea (Grey). Rather than fulfilling the traditional roles of an escort, she assumes the form of what her clients actually need-including emotional intimacy. She does not judge, and seems earnest in her attempts at empathy. The development of the lead as a reflective, introspective woman allows Grey to portray Chelsea with little emotional variance, which suits her well considering her lack of real acting experience.

Though grounded by the rules set by her and live-in boyfriend Chris (Chris Santos), Chelsea inevitably comes to contemplate her place in the world. Seeing herself merely as a convenience to others, she begins to entertain the mindset that life should be prioritized by her own needs and not the wants of her clientele. She subsequently challenges the very same rules that were originally implemented for her protection, creating an emotional chasm between her and Chris. This gap is only widened by the parallels of their occupations, for Chris-a personal trainer-is on an endless pursuit of self-promotion and advancement. He whores himself out as a streetwalker would, approaching potential clients and offering services, while Chelsea's approach is more businesslike in its formality. This creates a nice role-reversal or, rather, a subversion of our ethical expectations for certain professions. However, such insights are limited, as the film takes on a methodical, "take from this what you will" approach. This allows viewers to infer freely but I foresee frustration with the lack of thematic validation. To me, the movie works best as an examination of the link between profession and identity, specifically how the instability of one's job affects self-perception. The Girlfriend Experience is hardly a thorough look at the American mindset in the face of crisis, but its commentary is valid, and worthy of some thought. Recommended.

Throughout all of his works-both mainstream and independent-Soderbergh has accrued a vast array of visual tactics and trickery which, surprisingly, aren't on display here. Instead, the film's formal language is soft-spoken, consisting largely of static shots that emphasize how people and objects move within an encapsulated environment. Due to the relative lack of camera movement, most shots look fairly crisp with a sufficient level of detail present. Focal plays by cinematographer "Peter Andrews"-a Soderbergh pseudonym-makes peripheral grain inconsistently heavy at times, though this complaint is minor. Exterior scenes fare better in this regard and Soderbergh's approach to capturing the essence of New York City is sufficient, as is its representation of the Blu-ray format. Buyers may be hesitant to purchase Girlfriend on this format due to its relative lack of visual complexity but I doubt those who do will be in any way disappointed with the image and sound quality.