Man of many faces Sacha Baron Cohen reaches back into the familiar-namely into his collection of Da Ali G Show characters-for his follow up to the similarly-spawned film Borat-a movie that reached mega-hit status. Brüno runs on similar gears and also tells of a faux-foreign-newsman who runs haphazardly over cultural norms. However, Baron Cohen's increasing celebrity makes him easier than ever to spot and his characters' antics have become familiar (not old hat). Much less of Brüno feels impromptu when compared to Borat and the film also carries the burden of asking filmgoers everywhere to be sympathetic to homophobic concerns. Borat begged America to accept his attempted assimilation, which was seen as oddly endearing (plethoric anti-Semitism aside). Brüno is a different beast-a descriptor he'd likely relish. A flamboyantly gay class elitist (sprinkled with a dash of Hitler Youth), Brüno offends many with his brash ignorance. Not only is he less loveable than Borat, he's also much less inimitable. I don't foresee, "Look at the four of us; we are so like the Sex in the City girls!" leaving the same cultural footprint as, "Veryyy niceee!" In this, Brüno's returns were admirable, but pale in comparison to his Kazakh counterpart. The movie grossed $59.9 million dollars domestically, a number that is heavily frontloaded. A word-of-mouth favorite, it was not. 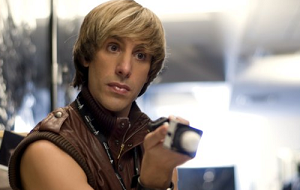 Rather than probe the same points as before, Baron Cohen structures his newest film as a litmus test for homophobia. The story itself is pretty inconsequential and opens with our title character explaining his background. He hosts fictitious fashion show Funkyzeit mit Brüno, which he declares is an industry hit. After an incident involving a curtain, a catwalk, and a Velcro suit, Brüno is shunned from the fashion world and travels to America in search of fame. He models his mission plan after typical tabloid fodder in mockery of our media premiums. His purported steps-to-success include hiring an acting agent, seducing a celebrity, and adopting an African baby; the child-which he names O.J.-eventually becomes the film's emotional appeal. After the baby is taken away on a Maury-esque talk show, Brüno is loosely strung together by a slew of storylines that allow Baron Cohen to expose the contradictory attitudes Americans host towards homosexuals.

The humor of the film is hit-and-miss, which applies to both its laughs and social context. Brüno's most poisonous barbs are the ones that tear away at hidden homophobia, though these are usually rhymed with juvenile semantic errors and belittling turns of phrase. At times the comedy is ingenious and pries at the cornerstones of middle-American values; at others it's merely petty. Baron Cohen's jabs at the fashion industry read as pot shots and lack the insight of his more precise pranks. Making light of the difficulty involved in modeling seems oddly below the movie's pressing matters and, although reducing the job to "walking and turning" is an innocent quip, it comes with a smidge of superiority. Most of Brüno's substance comes from the exposure of prejudice and misinformation, so criticisms such as this come off as somewhat hypocritical, at least in logical application. Then again, a movie that features anal bleaching and sex toy attacks is probably just trying to touch on the entire comedic spectrum, but its obvious head for relevance also suggests that it's capable of better. Brüno highlights America's overt heterosexual pride and lust for fame. It rather brilliantly illustrates our nation's penchant for groupthink, double standards, and dehumanization. But Brüno is not free of sanctimony or childishness. As I said, it's hit-and-miss, but thankfully the hits are hard, and incredibly worthy.