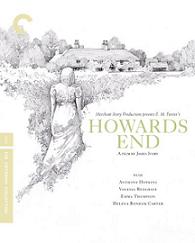 At a glance, James Ivory's Howards End is a slow, emotionally monotone work, though further reflection disqualifies these criticisms and paints the film as deliberate and free of melodrama. Its pace is reflective and Ivory's visual proach reads as an emulation of its novel origin. Distinctly a period piece (turn of the century England), Howards End aims to evoke the mood of an era rather than deconstruct its social foibles. Commentaries on class and gender issues exist, but are at times clunky and overstated. This is a film that works best in its subtle operations, namely in its rejection of the histrionic and its fleeting character focus. As people do in life, characters fade in and out of the narrative conscience, living their own lives abroad-so to speak-and coming back into picture only when their affairs parallel the story's concerns.

The story is that of three families-the well-to-do Wilcoxs, the middle-class Schlegels, and the working poor Basts-and the dynamic that results from their varying social locations. The three families are a bit obvious in their representation of class, though the chaotic interaction at the base of the story's structure does well in downplaying the obvious. The Wilcoxs and Schlegels are already acquainted when the story opens and a romantic entanglement ensues between Helen Schlegel and Paul Wilcox (Helena Bonham Carter and Joseph Bennett); a narrative movement that is quickly discarded. Rather than dwell on the emotional penance of young love gone awry, the film uses this ostensibly crucial moment as a reference point for future cross-family relations. It becomes an event that's all but lost in time, only recalled out of etiquette. The movie is built around relationships such as this, and aims to illustrate how incident strengthens or weakens our associations, but without instantaneous certainty.

Though the world of Howards End is one that extends beyond what is captured on film-implications about characters' off screen activities are abound-one player in particular is never far from sight or mind. Margaret "Meg" Schlegel (Emma Thompson) plays a family ambassador of sorts, hobnobbing with the Wilcox clan and extending charitable thoughts to the Basts. She can be defined as matriarchal, as she puts moral dignity and gracious posturing ahead of her own wants to carry on the good family name. Margaret's concern is that her siblings be afforded the social opportunities needed for upward mobility, provided they're interested. Though she never goes as far as forcing behavior on sister Helen or brother Tibby (Adrian Ross Magenty), Meg often scoffs at their robust conduct, especially when it contradicts what their name has grown to stand for: progressive and educated social realists. However, exposure to the Wilcoxs means exposure to a different- dare I say better-way of living. Meg becomes fascinated, if not infatuated with the Wilcox lifestyle, though this stems more from curiosity than compliance. She becomes an observer of their world, and is moved by the premium put on tradition. Also of importance is the family estate Howards End, which speaks to the power of symbolic sentimentality. As the story unfolds, this property becomes more and more of an issue-specifically when the question of its rightful ownership arises and what "giving up" the house would mean to the Wilcoxs. These musings on assets are pertinent and establish a cross-class link between the families. With this association established, the movie goes on to make passing comments about the gender and class differences of the time. Although this does well in defining the cinematic world, it's ultimately of little relevance elsewhere. Surely, some of the film's issues are universal, but the entire thing comes across as tedious in its era-anchoring. The reality of Howards End is beautiful and appropriate; it's just not very interesting.

Most of the film's deliberate pace is due to Ivory's obsession of visual establishment, and this gorgeous transfer from the Criterion Collection all but justifies his lens' longing. Shots that linger on flora and fauna are nuanced in coloration and articulations between varying hues are subtle, yet distinct. The relatively pale skin of the actors can be chalked up to period realization, and only makes the greens of foliage look all the more brilliant. Film grain is strong, but not distracting. Interior and especially exterior shots are handled well and help recreate the mood of a bygone era. Compositionally, the movie focuses more on environment than actor and the wandering camera seems to beckon for a narrator. One doesn't come, naturally, as Ivory's vision is sufficiently descriptive. The world he creates is one that speaks for itself and, thanks to Criterion, now speaks clearer than ever.

As impressive as the image quality is, it isn't as immersive as the new audio track. The attention put into tweaking even the most minute rumblings must have been great, as the result is incredible. The emphasis on music and sound is as tonally evocative as the visuals and only underscores an already lavish cinematic world. Though not an old film by any stretch, Howards End certainly benefits from the format's potential for poetic imagery and audial decor.