The meshing of family follies and Christmas customs is as new to cinema as it is to life, but, somehow, writer/director Arnaud Desplechin manages to put a fresh spin on such annual antics with his 2008 film A Christmas Tale. Desplechin's approach is not new in some sort of post-post-modern sense, but is instead enlivening in the way it harps upon the familiarity of the story and the elements that comprise it. The film bears a strong link to traditional tales of estranged sons, family sickness, and holiday bonding, but goes a step further by singling out these elements-using them to illustrate the functionality of human relation. Though ostensibly independent, the characters of A Christmas Tale are people in need. The extent and specificity of these needs are what defines those who carry them. 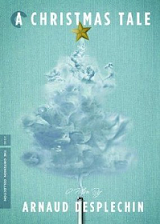 Revolving around the matriarchal Vuillard family, the film opens with an introduction that stresses both personality and raison d'être. Overlaps exist in some sense, purposefully so, as the characters are all fruits of the same tree. Accordingly, each player is paired with a qualifier in order to highlight their relation to the family's center: mother Junon (Catherine Deneuve). Abel (Jean-Paul Roussillon) is her husband; Elizabeth (Anne Consigny), Henri (Mathieu Amalric), and Ivan (Melvil Poupaud) are their oldest, middle, and youngest children respectively; Paul (Emile Berling) is Elizabeth's son; Faunia (Emmanuelle Devos) is labeled as Henri's lover and Sylvia (Chiara Mastroianni) is Ivan's wife. The point of such adamant labeling is two-fold: serving to aid the film's nostalgic air and, more importantly, show how these unconditional connections shape the characters. What's more, the age of the family is also important, as the now-adult Vuillards have learned to exist apart from each other, yet retain a strong family influence, if not semblance.

The coming together of the Vuillards is not without circumstance. Learning that Junon needs a bone marrow transplant, the family is quick to be tested in hope of finding a donor, but is remiss to learn that only Paul and Henri are matches. Paul is sixteen and unstable, having suffered a breakdown reminiscent of one Ivan went through at that age. Ivan has since gone on to lead a good life, but sees this event as a marker for Paul, for it would provide him a grownup sense of identity within the family. Henri is troublesome. Having been banished from the family by Elizabeth, Henri has become a distant figure and, upon returning, doesn't waste time in stirring up conflict. He feels his exile has freed him of responsibility to his lineage and, in so being, his marrow should come at a price. The reality of the situation is that Henri was only conceived to be a possible donor for Junon's first child Joseph, who died at age six. Whether or not Henri knows this detail is moot, as he was raised with a surrogate distance and had grown up increasingly offish. This too plays to the notion that, though the world isn't a small one, the one we inhabit is; that we are inescapably bound to those closest to us, and that our actions now cannot erase what came before.

As Christmas draws closer, the direness of Junon's situation becomes more and more apparent. Abel is an intellectual and tries to calculate his wife's chances of survival with and without treatment. He understands that life cannot be reduced to mere mathematics, but wants to give Junon the best chance at beating the disease. The two raised their children in this fashion-giving them a highbrow foundation to better prepare them for the world's adversity. With this, Elizabeth, Henri, and Ivan developed into extremely conscious entities, which turns out to be both good and bad. Though raised on the same basic ideologies, the family's divergence is only heightened by their capacity to reason. They also know how to get under each others' skin. The logic the Vulliard children exhibit leads to contrast in more abstract notions like family loyalty and love. To them, every thing and person has a discernible function; when one no longer behaves as the others see fit, their functionality (and place) within the family becomes negated. This idea is held up not only by the actions of the characters, but also by the stylistic choices of Desplechin as well. A Christmas Tale is pattered with idiosyncrasy-visual and textual-in order to flesh out concepts of perspectivism. The film is fashioned to show-not-tell how we see the world as only we can, similar bases notwithstanding. The result can come off as arbitrary and scattershot, but the film's overhanging sentiment and appreciation for the past help mold it into a wholly realized, congealed work. Much like family itself.

Desplechin's multi-styled film reads as especially confident on Blu-ray, due in part to the subtle tonalities that the format can account for. Broodier, more reflective scenes carry a bluish hue that helps represent a coldness that formed from years of emotional neglect. Contrastingly, indoor scenes are by rule a great bit warmer, particularly those that play up familiar comfort. The image shows a great level of detail in both cases, but falters a bit when a lack of light is present. Blacks don't appear to be given any DNR treatment, but communicate less information than more brightly lit objects. I would not chalk this up to a fault of Criterion but to a gap in technology between what we can record and how effectively we can present it. In other words, the cameras used on A Christmas Tale provide less information than Blu-rays are capable of displaying, at least in terms of darks. Meanwhile, the image does demonstrate a good command of texture and tone with suits and skin alike reading as true. Characters relate well to their surroundings and spacial considerations are appreciable. Coloration is consistently downplayed, save for reds, which are particularly striking, but not obtrusively so.

Being an ensemble drama, the film is of little action and sound is downplayed accordingly. Bits and pieces of side conversations can heard regardless of the scene, as someone else is almost assuredly close by. This, and other audial minutia, help relate the movie's theory that our social circles are at arm's length from others. Also notable is the original music of composer Grégoire Hetzel, which is fairly omnipresent. The levels of music raise and lower with the more histrionic actions of the characters, helping to cement the overall feeling of face-lifted traditionalism. Scoring is never overwhelming, at least in comparison to the film's visual concerns. Overall, Criterion has put out another exemplary example of Blu-ray capability, even though the film hardly runs the gamut of visceral versatility. The transfer is perhaps more expressive than the print I witnessed in theaters, but in no way trivializes the movie's nuance or power. Though I wouldn't race to find this release exclusively on BD, it does well in showing that the format is not only for blockbusters; that the finer things in life are also worth our attention.