Aliens are all the rage these days and, although reasons for their popularity can be attributed to several factors, it seems their metaphorical faculties are of prime importance. District 9 is, unapologetically, a thinly veiled allegorical apartheid. Set in South Africa-as if to extinguish any doubt-the half mockumentary, half action film tells of a race of aliens who wondered a bit too far from home. They arrived on our planet famished and fuel-less and, we being humans, naturally forced them into government-built ghettos. Obviously, this kind of racist (or is it speciesist?) segregation caters only to conflict, prejudice, and ultimately violence. Crowds took to theaters in droves to witness a world on the wire, and in the process made District 9 a rousing success. The film netted an impressive $115.5 million domestically and will likely perform well on home formats to boot. 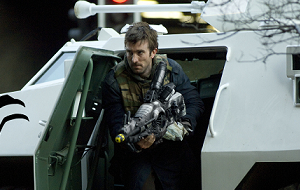 Despite a huge narrative shift somewhere around the one-hour mark, District 9 is pretty consistent in terms of tone and theme. The overlying message here is about equality, though I find the vehicle for this to be somewhat pretentious. While the film illustrates the sometimes-abject insensitivity of mankind, its effectiveness is hampered by the use of aliens in representing real-life cruelty. This is not to say that the onscreen squalor is completely unaffecting, but that it's certainly lacking in potency. I find it difficult to muster empathy for a life form I know little about, consciousness notwithstanding. While it's clear the aliens-or "prawns" as they're so often referred to as - are very intelligent beings, the picture defines their relative innocence and man's callousness all too crisply.

Thankfully, the movie offers other implications, ranging from the pending uses of biotechnology to criminal enterprise in slums. Though nothing is explored too deeply, the picture works at a strong pace and even attempts to evoke a more exacting emotional response by its finale. Again, I think the impact here is a bit softened, but not as impeded as prior scenes. District 9 is hardly a great film, but it's not without its moments, nor is it as compellingly stupid as other genre efforts. If anything, the interesting conceits of cross-species transformation and massive relocation will allow for a sequel that's a bit more thoughtful, provided director Neill Blomkamp wants it to be.