Mike Judge has made his living pointing at the foibles of the everyman and that's exactly the approach he takes in his newest comedy Extract. Considering Judge's resume-which boasts Office Space and Beavis and Butt-Head-there's little denying his aptitude for characterization, at least in terms of generating culturally agreeable personalities. At his best, the writer/director is able to conjure up humorous juxtapositions of self and society. At his worst...well...there's Extract. While bearing similarities to his more successful works, this new comedy is flat and pointless-I wouldn't hesitate to use the word "contemptible" either. Despite the iconicism of previous characters, Judge molds his Extract cast into an army of pop-defused clichés whose enemy is presumably laughter. The public wasn't impressed either and the film was only able to gross a mere $10.8 million on a high of 1,614 locations. 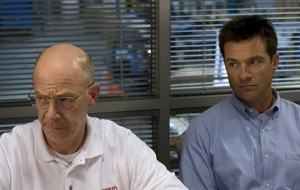 Perhaps Judge extended himself a bit much, or perhaps he should leave the workplace in favor of other inspirations, but Extract is light and messy. White-collared Joel (Jason Bateman) is a well-meaning factory owner who employs a gang of roustabouts that range from grindcore scenesters to racists in his flavor-extract factory. As the picture progresses he also adds a criminal drifter and a gigolo flunky to his band of help. The question of why an otherwise competent professional would make so many poor personnel decisions crossed my mind more than once and, by the picture's end, I had my answer: pity. Though once a "lowly" bartender himself, Joel built his business from the ground up-a fact that's never far from his tongue. He-and apparently Judge-feels his success is deserved and, accordingly, treats everyone with an air of smugness that even Bateman's soft-natured charm can't completely guise. In this, there's little or no reason for the audience to care about poor ol' Joel when his bored wife won't put out, or when his annoyingly clingy neighbor bothers him, or when his factory faces a crippling lawsuit. All the while, his best friend/bartender Dean-played by Ben Affleck, who seems to be channeling a milder, late-90's Adam Sandler-feeds him drugs and advice, both of which are bafflingly taken by Joel. Outside of the film's final resolutions, not much changes in the world of Extract and, even then, the only real triumph is Joel's newfound ability to get people to do what he wants. I can only postulate that Judge didn't mean for his movie to champion stratification and contentedness, but it sure does read that way.