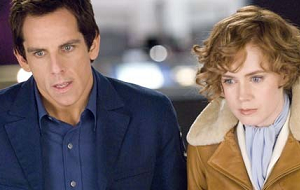 Perhaps paying tribute to the idea that bigger = better, Night at the Museum: Battle of the Smithsonian is an overblown whitewash of its predecessor. Though still preachy of opportunities abounding the real world, Smithsonian tears out the emotional foundation that made its original somewhat endearing, replacing it with some rather perplexing subtext (the sexuality of objects, for starters). While the first NatM film taught of paternal responsibility and peaceful coexistence, the new-to-DVD sequel prefers spurious sentiment and technological forbearance. Regardless, success breeds success. Smithsonian went on to rake $177.3 million domestically, opting to go the route of summer blockbuster instead of holiday hit.

As before, Ben Stiller is again the innocuously likable Larry Daley, only this time his priorities are a bit different. Rather than worry about providing for his son Nicky-both financially and as a role model-he now works busily amongst the capitalists. Though the gap between he and Nicky was the crux of the original NatM, this installment all but dismisses any concerns of parental empathy. Smithsonian instead looks to exploit the fragile relationship between life and death or, because the film is too delicate to call it that, existence and nothingness. The historical statues that Larry so adores are to be shipped to the titular institute for permanent storage, which would put an end to their nights of anthropomorphized enjoyment. Saddened by this loss of non-life, he travels to Washington with hope of collecting his befriended figures. Meanwhile, the Tablet of Ahkmenrah-which brings inanimate objects to being-begins working its magic, so to speak, on the world's largest museum. Chaos, of course, reigns.

With little heed for flow, cohesion, or space, Smithsonian is nothing more than a predictable series of bad laughs and low-intensity action; a gaudy trump card of what came before. What I initially found perplexing was the movie's denouncement of technology, which isn't to be expected from such a digitally dependent film. After giving the issue a little thought, I surmised that the picture is merely patterned by convenience. Themes and scenes are inserted willy-nilly into the script, if only to facilitate the picture's immediate, formulaic demands. Too slow? Inject a chase scene. Too distant? Cue up some inexplicable emoting for the apparently omni-conscious statues. I realize the intended audience of this film is children, but Smithsonian suspends more disbelief than its chaotic structure can support. Too fleeting are any issues of gravity, particularly in its implications of life. While the first film's message was along the lines of, "Treat every person equally," the sequel adds the qualifier of, "Even if they're not, well, people." By the movie's end, Larry learns that the key to happiness is to be around those you love, which in his case is a cluster of sculptures that can only interact thanks to an Egyptian curse. I guess any concerns we had about his relationship to his son or the millions of dollars in damages incurred at the Smithsonian will have to be discarded. By the picture's Laissez-faire brand of logic, it'll all work itself out anyway.

Despite my aversion to the film's content and craft, the handling of its Blu-ray transfer by 20th Century Fox is really quite splendid. Coloration is rich and highly saturated, but never to the point of showiness. In this, nuance can be observed within the depths of a frame, provided the camera stays put long enough for observance. A natural level of grain permeates the image, remaining consistent even in instances of heavy digital rendering, blacks, and rapid movement. CGI, though far from convincing, blends true with the film's live-action components and does so without sacrificing detail or contrast. The newly formatted sound track does well in making its presence known during scenes of peril, even if it lacks the articulated precision of the image. Still, the entire product is relatively exceptional, even when compared to BD releases of other recent movies.