Pray the Devil Back to Hell

Teeming with tragedy, Pray the Devil Back to Hell is a documentary that is at times hard to watch. Taking place during the escalating Liberian conflict, the film hardly complies with typical notions of unsettling cinema and instead disturbs by way of its vicissitude-namely in the way its subjects discuss some of the most abject living conditions of the modern world. Their voices are calm-alarmingly so-when recollecting the rape and genocide of their people. These voices are that of the Liberian women, a group of ordinary civilians who demonstrated unforeseen courage in bringing peace to their war-torn nation. The frankness in which these women discuss the horrors of their land only amplify just how commonplace such terror had become and how low humanity is capable of sinking. Conversely, it also speaks of their resolve and paints those involved as world changers. After garnering praise on the festival circuit, Pray the Devil Back to Hell went on to gross $78,986 on a peak of five screens. This paltry sum hardly does justice to what these women achieved on a true, global scale, nor does it reflect the importance of their movement, which, hopefully, will be seen by more on home theater formats. 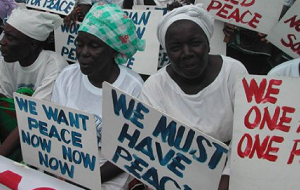 A landscape of death and pillaging, Liberia had grown into a democratically incompliant safe-haven for savages and warmongers alike. The political dynamic went something like this: Dr. Charles Taylor reigned as president of the country and his band of roustabouts ransacked the countryside ad nauseum, killing thousands and forcing even more from their homes, while warlords threatened to overtake him via copycat hostility. This state of perpetual cultural disorientation and accustomed violence eventually fed up local women, who banded together to form a Christian front that strove for peace. Christian protocol withstanding, the Muslim women of Liberia also joined the cause in order to ensure peace amongst the countryside. In this, the women are selfless; putting their own lives and beliefs at risk to establish a more peaceful lifestyle for their next of kin. Director Gini Reticker documents this struggle with a series of clips that seem overrun with peripheral gunshots and screams. The violence enacted on the Liberian home front is not shot directly, but rather wisely implied. Rather than focus its efforts on the powers of prayer and convenient labelings of good and evil, PtDBtH addresses more intangible issues-such as motherly love and survival instincts-and allows its subjects to author their own story. The amply feminist tones of the documentary dictate an incredible shift of power-a power under the control of femininity (be it garnered through emotional or sexual means). Though hardly an insightful look at the conflict on a cognitive scale, PtDBtH succeeds on both emotional and empathetic levels, and ushers in a climate in which mankind is capable of radical change.