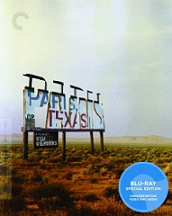 On paper, the story of Paris, Texas is a simple one. Travis-a drifter played pitch-perfectly by a stoned-faced, stiff-lipped Harry Dean Stanton-resurfaces after four years of absence and is eventually reunited with his seven-year-old son Hunter (Hunter Carson). Their reunion is short-lived, as Travis soon seeks out his also-astray wife Jane (Nastassja Kinski), to whom he delivers Hunter before disappearing again. Fin. Though this is only a modest summary of the film's events, it does represent the story in full and stresses director Wim Wenders' aim of making a motion picture that cares not about big events but little ones-the stuff memories are made of. Drawing from my meager outline, one may be able to infer the picture's functionalist cognizance-namely in how Wenders drafts his characters as vehicles to more actualized lives-but, what's more, one would fail to see exactly what makes Paris, Texas such a beloved work of cinema. While its more ostensible themes are important, one must experience Wenders' immersive pictorial of azure skies and southwestern Americana to truly realize the movie's scope-the size of which is evident the moment Stanton wanders onscreen.

When we first meet Travis, he's plodding through endless stretches of desert terrain. The scenery is striking and, moreover, free of man's influence. Though I could spend the remainder of this piece trying to do justice its visuals-the natural tranquility that Wenders oh-so-easily captures, his eye for projecting physical and emotional desolation, the way he evokes appreciable beauty in life's minutia-such words would be a waste. Even when entranced by the landscapes, the viewer must ultimately ask how Travis got there, where he's going and, for that matter, just who he is exactly. This is the picture's first instance of ambiguity, a quality that Wenders revels in here. As the story progresses other examples of dubiety surface, lining life's unknowns with a certain poetic mysticism. In this, characters are painted, not as complex or allegorical, but as simple and real. Many of them-notably Travis-act elusive in motive and judgment, yet Wenders never encroaches on these issues and instead lets life, so to speak, take its course.

As affecting as Paris, Texas is on a human level, its visuals are also telling and work in service of the characters by developing a wholly realized backdrop of coruscating lights and gorgeous horizons. The attention given to the environmental and cultural décor communicates a longing for or, at the very least, profound appreciation of the American southwest on the part of the German-born director and, although his film offers a subversive look at the American nuclear family, it never reads as critical or even negative, for that matter. In this, Wenders is able to concoct his own brand of Americana, which unfolds without contrivance or force all while contrasting the majesty of nature with the smallness of man. To see his vision is to wish it real-it's that humbling.

With the camera soaring over a barren landscape and the sun glimmering off polychromatic rock formations, it's immediately clear that this new Criterion "Director Approved" Blu-ray exactingly restores the film's aesthetic as intended. In accordance with the film's emphasis on ideas of progression and location (both social and physical), the high-def transfer clearly defines its differing locales-desert, suburban and city-with an array of textural and illuminary nuance. The vast skies of the film's opening display a blue so piercing that it exudes an unmistakable air of warmth. Contrastingly, as the picture moves toward more urban regions, a colder, more metallic aura persists. Criterion's Blu-ray treatment renders such transitions seamless, despite the rather appreciable differences in atmosphere, and does so with little excess grain-which only appears noisy in a few early shadows-or noticeable manipulations. Interestingly enough, the aforementioned azure skies look less preternatural than they have in prior releases of the film, in which they bare an unmistakable tint. The reason I label this as interesting is because Criterion also did some heavy recoloration in their last Wenders release, Wings of Desire. Regardless, the transfer here is all but flawless and few will miss the hazy hue, as this reproduction is far more balanced and consistent than its DVD counterparts. Naturally, Ry Cooder's unmistakable score-a recreation of an old blues song by Blind Willie Johnson-is also exquisitely preserved and, all-in-all, the disc is as demonstrative of audial subtleties and sound arrangement as it is of Wenders' command as an auteur. Strongly recommended.