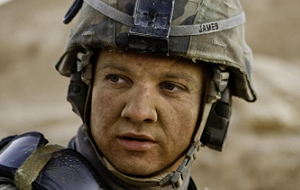 In what is perhaps the first competent film concerning the Occupation of Iraq, director Kathryn Bigelow opts not to make a film of political interest, but of human interest. She forgoes the usual inclusion of bush-league political prattle and instead builds her film around musings on masculinity and the human psyche. Though critics took to The Hurt Locker and its shaking, austere vision, audiences found their kicks elsewhere. The film only managed to gross $12.6 million during its theatrical run, but will likely see a rise in popularity, as both Bigelow and her film have been heavily decorated with Critics Awards and the like. Keep it in mind come Oscar time.

The film opens with a quote by Christopher Hedges that matter-of-factly states that war is a drug-a theme best embodied by Jeremy Renner's SSgt. William James. James was sent to the U.S. Army's Bravo Company to be the team leader of an EOD unit, following the death of his predecessor Sgt. Matt Thompson (a nice bit part by Guy Pearce). Thompson died despite his cautious airs and penchant for protocol and James thrives despite his ostensibly reckless ways. This fact isn't lost on his new team members Sgt. JT Sanborn and Spc. Owen Eldridge -Anthony Mackie and Brian Geraghty, respectively-who liked Thompson and fail to find humor in death's irony. Both Sanborn and Eldridge view war as cold-as if it were slowly distancing them from humanity. James, on the other hand, carries himself like a boy playing a friendly game of war in a rural backyard. Though adventurous and brash, he is characterized as having a grasp on mortality that the others lack; he respects death (and life, for that matter) while Eldridge and Sanborn are too wrapped up in being afraid of it.

Despite sound characterization-a few clunky generalizations notwithstanding-The Hurt Locker succeeds first and foremost as an action film. Bigelow shows an undeniable knack for craft as she details the tension of what an EOD unit faces on a daily basis. She shoots their missions with a bubbling fervor that's viscerally primed to boil. At the most climatic of moments, the movie succeeds in blending sight, sound, and suspense into a unique alloy of evocation. Her lens is not flashy or demure, just appropriate. The Hurt Locker is an insightful-somewhat inconsistent-rumination on the pangs of modern warfare and the impossible situations it forces people into, badass craftsmanship notwithstanding.

This Summit Entertainment release is a striking one, and preserves Bigelow's vision exquisitely. The imagery is generally awash with light from the omnipresent desert sun, for most scenes take place in naturally lit exteriors. In this, colors dull but don't flatten. The lens of cinematographer Barry Ackroyd captures the sun-drenched landscapes at their most beautiful, which is in direct contrast to the grimness of humanity present. Despite the heavy reliance on natural light, the Summit transfer handles darker interior shots well without an excess of grain-which is already plentiful-or noticeable DNR. The audio track is also well nuanced and scaled; it adjusts well for space and periphery and, most importantly, knows when to rumble. Though the film is hardly an aesthetic marvel, it is a gut rush, and this release definitively marks it as such.