The Boys Are Back

By no means bad but my equal means good, The Boys are Back is a curious picture that refuses to settle into melodramatic tendency but isn't above by rote characterization and trite estimations of male bonding. Director Scott Hicks-whose credits include the also-pretty-but-vacuous adaptation of Hearts in Atlantis-takes full advantage of his Aussie setting by rhyming scenes of dramatic discourse with postcard art views of the area's natural vibrancy. Awash with a certain penetrating saturation, these settings are almost a character in and of themselves, save the fact that relevant human-environment interaction is limited, if not altogether missing. In this, nature seems distant, fleeting, and inconsequential. Ironically enough, this observation sums up my feelings toward the movie in full: like me, the camera seems more interested in what's going on opposite the characters than what they're actually doing. This isn't to say that all actions and subsequent ruminations of the cast are wasted-in fact, the performances range from average to pretty good-just that they're little more than generic and more than a little safe. Perhaps following Hicks' lead, Boys' distributor also erred on the side of caution, releasing the film on only 108 screens domestically, which explains its modest $809,752 gross. 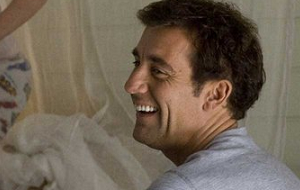 Starring Clive Owen as sportswriter Joe Warr, Boys chronicles the loss of his wife Katy (Laura Fraser) to cancer and the periods of mourning and readjustment that follow. Hicks treats this narrative hub with some distance, as he never develops Katy-or anyone else for that matter-with much distinction. Naturally, Warr often reflects back on her, which leads to the visions of a lovelorn husband-a perspective that's more sentimental than telling. Though this practice safely wards off genre-common examples of stilted emotional artifice, it also cheapens the film's running dynamic on maturation. With his wife deceased, Warr must not only learn to do household chores (the horror!), but also act as both masculine role model and sympathetic ear to his young son Artie. In one of the picture's brighter moments, Warr deftly acknowledges the duality inherent to these two roles and the futility in trying to be as nurturing as his late wife. Still, rather than using this as introspective foundation, Hicks cuts to another shot of picturesque scenery before dismissing the idea all but entirely. Though Warr does change over the course of the film-becoming a more fitting father and bachelor alike-Boys reads as too tonally episodic to be in any way evolutionary.