Again playing a victim of small town pangs and high school milieu, Ellen Page stars in the directorial debut of Drew Barrymore as the increasingly mischievous Bliss Cavender-who, in the face of some oppressive parenting, joins a 21+ female Roller Derby league. Her mother Brooke-who's played by Marcia Gay Harden and represents the ironically dated stuck-in-the-50's notion of maternal vicariism-pressures Bliss to perform in pageants. Her father Earl (Daniel Stern) seems most obsessed with football and brews and lamenting the son he never had. (His neighbor all but emasculates Earl, what with the signs dedicated to his boys' football prowess proudly displayed in his yard.) Naturally, a dynamical potpourri like this just isn't complete without some less-than-subtle sexual bluntness between the adults, which expectantly fuels (and justifies!) Bliss' notion that she's stuck in familial hell. Crowds treated this Page-via-Barrymore vehicle a bit timidly and, after opening at 1,721 screens, it began to slip out of theaters and soon ended its run with a $13 million haul. 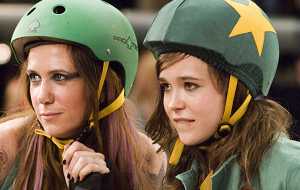 Barrymore directs her first effort with an air of discomfort, both from character and culture. As such, Whip It's personalities are marked by a flimsy resilience and its faux-pop-punk flourishes suggest that Barrymore cares, not for the youth of today, but for how she evokes their world with hollow parallels. Unimpressive too are the scenes of actual roller derby, which, likely due to the director's inexperience, feel abbreviated, clunky, and staged (the biggest offender). In this, it's hard to surmise just how hard particular hits are, what team is scoring when (ample is discontinuity), and if Barrymore had been drinking on the set. Appropriately enough, her character Smashley Simpson-opposite other "gems" like Maggie Mayhem (Kristen Wiig) and Iron Maven (Juliette Lewis)-straddles the line between the inebriated and the perennially concussed. Though not indicative of Barrymore's technical skill, which is more rigid than sloppy, her gratingly thin presence as a character mirrors her visual and narrative sensibilities-wholly one-note with few signs of coherence.