A tonal poem of the highest order, Terrence Malick's Days of Heaven is as beautiful as it is tragic. Famous for its picturesque landscapes-which are defined by the majestic, preternatural pastels of DP Néstor Almendros-and score that eerily evokes the relentless passage of time, Days is one of the most sensorial films I've seen. And yet, to laud it merely for its resplendent craftsmanship would be a critical sin, as Malick uses his celluloid canvas to paint a much larger picture-putting humanity into perspective. 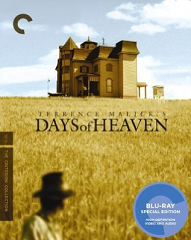 While the title suggests, at the very least, a minor religious undercurrent, Malick's aim is not to impress issues of faith unto his audience but rather to demonstrate how such ideologies are used to explain our place within the world. Sure, to gaze upon the film's imagery is to be humbled by nature's scale and, perhaps, believe that such pulchritude is due to divine dispensation, though this hardly explains the work's equitable fixation with social location and amorality. As such, the characters in Days are decidedly human, and flawed, in nature. There are no moral divides that paint one character as "good" and another "bad" and we, the viewers, are not asked to hope for the characters but to simply observe them. Linda (Linda Manz)-a young farm girl ascribed with a necessity to find an explanation for everything-describes it best. She narrates, "Nobody's perfect. There was never a perfect person around. You just have half-angel and half-devil in you." Naturally, this quote is more indicative of her character than the movie's theological philosophy, making it read as a tongue-in-cheek jab at supernal simplicity, but it also serves to outline Malick's unbiased approach to characterization. Those in the film, even the main players, act as people at times do: ignorant, irrational, and selfish. And because behavior, even at its worst, is transient, our actions can sometimes bring about overly enduring, even violent repercussions. Thus, it's not hard for, if you'll pardon my redundancy, our days of heaven to quickly turn hellish.

Amazingly, the aforementioned concerns are housed by a fairly standard narrative. After accidentally offing his boss, short-fused steelworker Bill (Richard Gere) flees Chicago with his lover Abby (Brooke Adams) and younger sister Linda. They soon find themselves in the Texas Panhandle where Bill finds employment as a wheat sacker. It's here, with Bill and company living amongst the other farmhands, that Malick expounds not only on class difference (those who labor v. those of privilege) but the sting of realizing one's lot in life. As Bill works hard to earn a modest keep, he comes to lament his situation and contrives a way to cheat the status quo. However, social mobility comes at a price. For Bill, it's in devaluing those he once held dearest-namely whoring off Abby in hopes of ultimately procuring a farmer's (Sam Shepard) fortune-that proves most costly. In this, Malick communicates the anguish in learning of our importance (or lack thereof) to others by showcasing the human psyche, and the culture supported by it, as unsound entities. In turn, his cinematic world comes to crumble with a series of scripture-inspired misfortunes. Still, the real tragedy lies not in the hands of some god sending a plague of locusts-which actually acts as a catalyst for behavioral response-but in the failure of humanity to exist peacefully. To be sure, the film's most affecting message is that we take for granted what we do have by recognizing the beauty inherent to life all too late; that we will not transcend the reality of our situations but eventually fall victim to them.

I've heard the phrase, "Movies like this were made for Blu-ray" more than a few times and while I hate to split hairs (actually, I love splitting hairs, but bear with me), I'd be remiss if I didn't say that the statement should be reversed: the Blu-ray format was made for movies like this. Despite being 32 years old, Days is exhibited awesomely on this Criterion transfer, which brings a renewed sense of depth to Almendros' sumptuously seraphic skyscapes. One can now imagine getting lost in the boundless fields and illusory sunsets thanks to this hi-def representation. Detail is also of the essence, allowing stalks to sway serene in the breeze; each plant can be seen waving and dancing on its own accord, adding to the picture's inherently immersive quality. All of this is evident through a fairly heavy grain structure, which gives the image natural, textured feel. Black levels fare well as far as consistency is concerned, and colors run smoothly into each other as to uphold the film's natural emphasis. Still, because of the film's age, some shots-mostly dimly lit interiors-are noticeably off in color, and sport a heavier, thicker grain. This flaw, if you will, is no fault of those at Criterion, as it can be chalked up to imperfections resulting from improper storage or even father time having his way with the original prints. Also apparent are some minor artifacts or, rather, the remains of minor artifacts that have been removed via digital alteration. Such remnants are hardly common, or even unsightly, but do appear to disrupt the picture's otherwise consistent levels of grain with bouts of spotted gloss. Nitpickery aside, the image is as wondrous as fans could have hoped for.

From the constant clunking of farm equipment to an ominously whooshing wind dial, this release is as much a feast for the ears as it is the eyes. Besides Ennio Morricone's score-which maintains its piercing tonality while sounding crisper than ever-little audial details are played up marvelously as to accentuate the picture's resoundingly atmospheric scope. Non-diegetic sounds especially enhance the experience, as viewers are privileged to noise outside the frame's periphery. As such, one feels almost surrounded by the picture's natural tranquility, making Malick's masterwork all the more experiential and, moreover, all the more appreciable.