In Jim Jarmusch's Broken Flowers, Bill Murray's Don Johnston, a veritable Don Juan coping with an ironic abandonment and lack of legacy, sojourns to the current locales of his four ex-lovers in search of a son he may or may not have fathered some twenty years prior. Though far from perfect, Flowers operates on a refined, self-aware sense of travel-induced monotony-one that draws on the commonalities of civilized life-and makes light of the humorously impromptu pop-ins that so shake its hosts' otherwise complacent, yet socioeconomically variable, daily routines. Everybody's Fine works on a similar level. Eight months after his wife's passing, Frank Goode (Robert De Niro, again cashing a check) travels across America to pay his four children a surprise visit, interrupting their now independent lives in the process. Unlike the Jarmusch film, however, Everbody's Fine plays not on the ambiguity of divergent lifestyles but on a kind of "Cat's in the Cradle" sentiment that debases the picture's early strengths by positing tropes of the most lowbrow variety. In what is, in my mind, the film's most grating moment, Frank sits around a picnic table with his children; they, in the form of toddlers, speak of their current problems with a juvenile air that undermines issues of drug use, patriarchal induced pressures, and even sexual identity ("She's not even sure if she likes boys!" mocks a sibling). And while this is all meant to be more telling of Frank and how he views his now grown kids, it's equally telling of how simplistically director Kirk Jones sees post-adolescent development. Thankfully, not many people took to the road to see, well, De Niro taking to the road and, in the end, Everbody's Fine grossed only $8.86 million on a high of 2,141 screens. 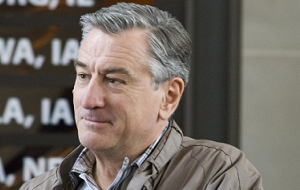 I find that it's a bit of a shame that today's youngsters are growing up with this De Niro-it doesn't seem fair, as the man behind some of the more iconic characters in American cinema is reduced to playing roles of such perennial poppycock. Conversely, the aforementioned Murray is doing some of the best or, rather, most ambitious work of his twilighty career-Garfield and the like notwithstanding-by collaborating with young talents like Sophia Coppola and Wes Anderson. This isn't to say that Murray is superior to De Niro, but that the latter never exceeds expectations, both in terms of performance and project selection. Here, the former goodfella is afforded some opportunities to showcase his once renowned chops, though the one-dimensionality in which Jones writes and directs ultimately supersedes the range DeNiro can convey. His Frank Goode-condescendingly categorized by his well-to-do daughter (Kate Beckinsale) as "blue collar-to-middle class"-naturally cares for his offspring and their stakes in the world but only via the insistence of his lofty expectations. In this, he spent most of their childhoods working in an attempt to not only procure a better life for his family, but also to instill in them the kind of work ethic he values so. As such, the Goode kids grow up to be miserable successes, which seems beyond Frank's comprehension. And while the picture features some poignant moments about a man coming to terms with his limited, sometimes detrimental influence in his children's lives, Everybody's Fine too often divulges in familial dynamics that are too shallow to be anything more than trite approximations of waning masculinity.