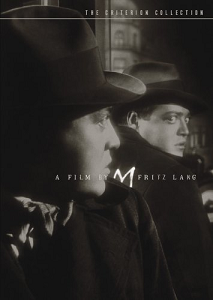 If there’s one thing certain about the characters of Fritz Lang’s M, it’s that they’re not the most eloquent of conversationalists.  Eschewing discourse, they talk either at or over one another as to perpetuate an air of communicative chaos that abounds what I consider to be a deceptively cognizant narrative.  And this isn’t to say that the work is explicitly about rifts in conversational courtesy, but this collective lack of tact does well in bolstering the picture’s keenly realized social spheres.  Furthermore, M is Lang’s first sound film; as such, his approach to person-to-person dynamics not only compliments his capacity as a storyteller but also allows for relevant commentary on cinematic sound design.

Though city set, there exists a cozy, almost small town milieu in the way those of differing social locations – who run the gamut from beggar to lawmen to men of more illegitimate persuasions – so interpersonally interact.  That said, Lang posits that some form of communal catalyst is needed for such interclass cooperation to occur; in M, it’s a child murderer.

A delightfully delirious Peter Lorre plays Hans Beckert, a predator who lures the local youth with chocolate and balloons before foining them, as implied, in more ways than one.  In this, Sturm und Drang swells amongst the citizenry.  Mothers wait with bated breath for their children to return safely from school, and the police, embarrassed as they are baffled, raid the city’s seedy underbelly; accordingly, the criminal populations, in a tizzy over these irruptions, bring to bear vigilantism – specifically, they commission the local hobos to keep a lookout for suspicious behavior.  Though each of these four groups have their own motive – maternal instinct, public faith in professional competence, clandestineness, and, of course, money – it’s the congruity of their end goal that, even in working independently, gives way to social progression.  And yet Lang goes beyond strokes of mere utilitarianism in the way each of the motives aforementioned have roots in fear – how survival, and the threat there to, is as intrinsic an excitant as there is in warding off threats to our lives and lifestyles alike.

This sense of terror-induced trepidation isn’t mutually exclusive to the townspeople, as Beckert himself is seemingly teeming with fears of his own – not of getting caught, which is also relevant, but of his inherent exigency to dispatch babes from the Earth.  When capture befalls him and judgment impends, he pleads for his life by appealing to due process.  Despite breaking a survivalist’s most sacred of taboos he still, first and foremost, wants to save his own neck.  Which is why the picture’s finale – a kangaroo court headed by the criminals and attended by the outraged townspeople – is such a pertinent indicator of Lang’s judicial leanings.  It seems that, although fear can be a great motivator, it only perceptibly perpetuates any form of grounded rationale.  Sure, we as humans are inclined to act upon our fears, for we feel vulnerable in their wake, but when we allow such alarm to destroy the ties that bind us, something greater is lost – our collective human identity.  This, I’m afraid, can only lead to further tragedy.

For starters, this is the oldest (ringing in its 80th birthday next year) film I've had the privilege of seeing on Blu-ray and, though I am impressed by Criterion's steadfast dedication to restoring classic films, the folks there are, after all, not miracle workers. In this, some scratches still attenuate Lang's otherwise atrabilious aesthetic, though this is somewhat disguised by the boosted levels of blacks, which further the feel of melancholia. As such, contrast levels feel somewhat sedated, for they appear more natural than spectral, though this is less a flaw than it is an observance. That all being said, the image is still wondrously clean given the age of the picture - detail is plentiful and texture of the essence. Lang's use of shadow and light remains as eerie as ever and the silky style of his tracking shots - which, while intriguing to watch, also act as ebullient expositions of class difference in the way the camera often flows from levels of high prosperity to low and vice versa - only further elucidates the director's genius.