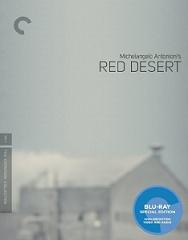 An environmentalist before it was vogue - not in the ostentatious tenor that we so often associate with contempo consumerism but in a way that divulges dialogue betwixt surroundings and self - Michelangelo Antonioni redefined the already lauded language of his later-labeled alienation trilogy (L'avventura, La notte and L'eclisse) in order to illustrate not only the more obvious effects of mankind's inexorable industrialism but also how our personalities pattern around the phenomena we're most proximal to. But this isn't to say that this piece, The Red Desert, is a monotone examination of Earth's nonfungible nature, as the auteur's most attentive to man's inherent need for individualization in a society that affords nothing of the sort.

The opening credits are discernable in the way factories are photographed with a distinct lack of focus. The camera pans with an atrabilious aura across manufacturing plants and the like, evoking an impersonal perspective that, while ominous, doesn't reflect any immediate danger. However, when the credits cease, so too does Antonioni's obscured aesthetic. A lens sharpening smashcut centers on an exhaust vent that rhythmically emits fire into the air, bellowing a noxious cry with each periodic burst of burning byproduct. And the amazing thing is, at least from the standpoint of subtlety, Antonioni opts to explore not our environmental indifference, at least not entirely, but the ecological shift that occurs when we drastically alter the way we live. Still, this is only a drop in the picture's proverbial bucket or, perhaps more appropriate, its mephitic marsh.

Giuliana - a plant manager's wife played by the insatiable staple of Antonioni's prior works, Monica Vitti - is the existential fulcrum around which the picture's more latent themes revolve. She battles mental illness, struggling to orient herself not only to the demands of homemaking and childrearing - which she feigns interest in, as if to gain understanding of the propagated regiments that afford social civility - but also her place on grander stages, such as life. And although these concerns are far from mutual exclusivity, it's the latter that Antonioni draws from most, gradually bestowing his heroine with a more matured sense of cultural consciousness - namely, how we become the sum of the actualities about us. An experiment-cum-riddle offered by Giuliana's son (Valerio Bartoleschi), though ostensibly irrelevant, aggregates the entirety of this concept with an understated delicacy. "What's one plus one?" asks the bambino, knowing his mother's answer will inevitably come back "two." And it's not until the boy drips two drops of liquid unto each other that she realizes that humanity, and our interactions within its realm, aren't much different; that mathematic theorems explain how things work, yet fail to account for the totality of existence, perception included.

Guiliana laments that no one needs her - that she is but a single drop in a collective pool of people. But she also begins to see the way her fellow man is treating the Earth as if it too is a separate entity that's meant to be built on rather worked with. The film's towers and smokestacks and drainage pipes (and the way these markers of progress cause the characters conversational, among other, discomforts) when viewed in such a context, appear more combative than constructive or, better yet, congealed. Sure, Antonioni may not posit a solution for either existential impasse or environmental exigency, but in addressing the essence of existence as enigmatically entangled, he demonstrates, through his unique brand of formalism, how easy it is drift apart from a world that doesn't seem to need, or even want, the individual.

As fetid fumes flow from factories, one can't help but affected by the captivating cadence of industry's more sensorial attributes (at least I couldn't), especially as presented by Antonioni via the Criterion Collection, who again deliver a Blu-ray restoration that pushes the qualitative envelope of high-definition home viewing. Red Desert, though bleak in tone, is compositionally vibrant, juxtaposing more Earthy hues with the intrusive iridescence of industry, all of which is encapsulated in a stunning 1080p transfer that makes the running contrast of natural v. nocuous into a wondrously imaged exegesis. Generally, for whatever reason, my home theater represents reds well, at least in terms of vividness, but in the instance of this BD release, greens, blues, and yellows are all similarly striking. Focal depth, which Antonioni manipulates as to evoke Guiliana's detachment from her ever-mutating milieu, is also superior. The image abounds in grain - augmenting the manner in which Antonioni so deftly plays with depth - doing so with a natural, textured consistency. Sure, a few uncorrectable artifacts make their presence known, mostly in the form of vertical scratches, but these are few and far between and are hardly enough to take one out of the otherwise absorbing environments of organic erosiveness. This is perhaps the most formidable of Criterion's 1960's restorations, acting as an exemplar as to why the arthouse crowd (including yours truly, of course) eagerly awaits their every release.