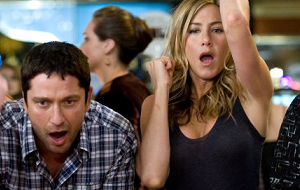 In what could have just as easily been titled Aniston Get Your Gun, Andy Tennant’s (Hitch) latest rom-com catastrophe, The Bounty Hunter, is nothing more than a series of blasé parallels of the “Anything you can do…” variety that never expound on its running theme of battle-of-the-sexes one-upsmanship.  Just as Jennifer Aniston’s Nicole Hurley lays a Larry Holmes-like jab into Gerard Butler’s Milo Boyd’s nether region (insert collective male groan here), he too then turns the tables a la a Brian Dawkinsesque flying tackle, slamming her to the ground with back-breaking ferocity (high-five, brah!).  Sadly, this is the kind of gender-bending body humor that passes for comedy and, worse, gender politics these days.  Nary have I seen such utter complacency in taking the most ostensible qualities of male-female relations and positing them as more-identical-than-equal, in turn failing to demonstrate any sense of cultural consciousness that could have perhaps aided the film’s otherwise jejune exposition.  No, Hurley being characterized as a “strong, independent woman” is enough to appropriate the sexes as all-but apposite, even if that means bestowing the heroine with better policing abilities than, well, the police, and allowing her to succeed specifically where ex-cop, ex-beau Boyd fails – namely in everything from leading an investigation to hunting down bad guys in dark warehouses (though her wielding a shotgun when compared to his handling a handgun does make for a deliciously-delirious, phallic-minded folly).  Still, thanks to mediocre star-power and audiences who think Ke$ha’s “Your Love is My Drug” an apt analysis of thirtysomething relations, The Bounty Hunter went on to gross a pseudo-successful $67 million on as many as 3,118 screens.

With a story that works in service of such aforementioned absurdity, Tennant bounces his work from plot-point to plot-point, caring less about coherency than he does about filling out his feature-length thesis on how what’s good for the goose is also good for the gander.  Characterized by banality, Boyd is a prosaicism of those down-on-their-luck.  He spends his days hunting bail jumpers and his nights mitigating his martial melancholia with, what else, gambling and whiskey.  He is not a smart man.  Conversely, Hurley is outwardly thriving, not only finding unprecedented success in the dying world of print media but also garnering attention from pretty much everything in possession of a penis.  So when bounty hunter Boyd is offered five grand to bring her to jail, he jumps at the offer, acting as if completing the job will bring about bifurcated benefits – not only will he be able to make good on about half of his $11,000 gambling debt (this is why we don’t have professional craps players, kids) but, more importantly, the physical and professional domination of his ex-wife will bolster his waning sense of masculinity.  But rather than explore the paradoxical pairing of two lovers constantly leveraging for control, Tennant seems content letting the former couple drop their gloves and have at it.  They, on separate occasions, handcuff each other to a headboard (no, not in the “fun” sense), take turns landing lingual licks, and drag each other into an increasingly inane underworld of criminal cliché that includes, but is not limited to, dirty cops, drug dealers, gambling rings, and incompetent henchmen.  Really, the only thing missing from The Bounty Hunter is any semblance of sense or cinematic savvy.  As such, I recommend renting at your own risk and buying only as a backhanded gift.

As viscerally unremarkable as the movie is – despite the occasional injection of shoddily shot chase scenes and crudely choreographed shootouts – it is represented fairly well on this Sony Blu-ray release, even if the image does skew to the warm side.  While skin tones and other foreground objects appear too red at times, background colors fare better and, generally, provide variegated environments that play host to some rather rich detail.  I found a few scenes particularly striking, namely a July 4th parade, which did well in capturing the polychromatic complexities of such celebrations, and the scenes shot within the always illuminated Atlantic City.  Still, there seems to be a lack of discernible depth to the picture quality, though this could be the result of compositional incompetence on the part of DP Oliver Bokelberg.  Audial considerations are on about par with the movie’s visual representation, being at times brilliant but failing to take full advantage of the format's nuance or power.