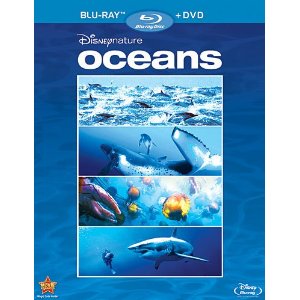 Referring to Disney's Oceans as a "movie" is a disservice: it's an artistic spectacle. While filmmakers Jacques Perrin and Jacques Cluzaud (Winged Migration) attempt to give a vague narrative through the gentile lulling of Pierce Brosnan, no storyline is needed. Oceans is a captivating 84 minutes of underwater verité.

Unlike Earth, the first of Disney's ecological docu-drama series, Perrin and Cluzaud aren't able to rely on adorable elephant calves or cleverly kissing birds, so they wisely turn their cameras on the hierarchy and intricate biological construction of aquatic life. It's mesmerizing to watch close-up as a crab slinks by a sea urchin's spikes, or a tendril of krill dangles unaware of its impending relocation to a whale's esophagus. One of the highlights of Oceans is the crescendo of a winding school of sardines under attack from gangs of hungry dolphins and seagulls. The scene builds and builds as the gulls divebomb and dolphins penetrate, until sharks and whales join the feast. Perrin and Cluzaud are at home both in and out of the water and from aerial assault to finned flak, they cover every vantage point.

And then there's the phenomenal underwater fights. What's a mantis shrimp? Oceans doesn't educate, but it does show us that it holds its own in pincer war with a crab. The directors recognize that good foley is needed in certain scenes (while sound travels in water, could these rockslides, claw clacks and ink explosions be source sound?) andc omposer Bruno Coulais' score nicely punctuates the natural beats.

The one downfall comes an hour in as we shift to fishing nets catching unintended prey. The camera backs up to outer space as Brosnan tells us that scientists are monitoring climate change and oceanic activity and our planet is in jeopardy. Cut to rubbish floating in the ocean ...and then cut to penguins jumping out of the water and otters poking their cute little whiskered snouts at the camera. Oceans decides to take one minute (no more) to attempt to explain the planet's crisis, and then changes its mind. It's a shame, too, as this strange tonal shift pulls us away from the spectacle, although the image of a sea lion swimming around a rusty shopping cart is eerily hypnotizing.

Disney chose Perrin and Cluzaud well; the team has an incredible sense for camera speed and approach. Oceans moves as if underwater even on solid terrain, with the directors slowly introducing the camera's eye to landscapes and creatures in the midst of just simply being. It's deliberate, casual and wonderful.

The blu-ray set is a half-wasted opportunity. On one hand the transfer is immaculate; with dolphins blazing by the camera, there's so much fast movement in the movie, yet no video noise is detectable. Oceans is built on a palate of pastel blues and subdued neons, and the colors register perfectly. This is absolutely the best video transfer I've seen on blu-ray.

On the other hand, the menus on the blu-ray are frustrating. They're interactive as a special feature: you see the Earth, and its water flow mapped (though this is never mentioned in the movie). The date, time and temperature appear on screen. Around eight random hotspots appear on the Earth, and when choosing them you either see brief facts about the location, or videos about the ocean life there. While this is kind of fun to play with for a moment, it brings nothing substantial to the experience. Considering the only two real special features are a Joe Jonas/Demi Lovato music video and a commercial for Disney Nature (which is annoyingly pixilated and muddy), the interface seems cheap. Who cares what today's date is - don't you want to know how the filmmakers lit underwater without scaring its subjects away?