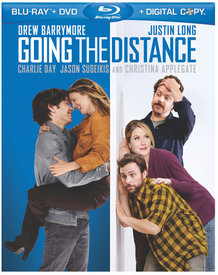 Despite the attempted interjection of topicality in Nanette Burstein’s Going the Distance – which, however overstated, still speaks to the pressures of interpersonal progress whilst typifying the cultural Catch-22 of having to choose between one’s private and professional lives – the movie, sadly, is too defined by its dependence on blasé genre conventions and petty social observations to read as anything above passable.  Starring Justin Long as noncommittal archetype Garrett Scully and Drew Barrymore as his one-night stand-cum-girlfriend Erin Lankford, the film follows the pair’s relationship through an assiduous series of romcom roadblocks before inevitably ending the thing on a happy note.  But still, it could be worse, as Burstein’s social concerns read as more confounded than they do offensive.  Whereas this year’s Dear John detestably used terrorist attacks and terminal illnesses to elicit empathy for its star-crossed couple, Going the Distance goes the apolitical-yet-economically-ill-conceived route of employing America’s recession as a way of keeping its own characters apart.  In this, the film at least affably feigns relevancy, though there exists a half-assed essence to it that’s evident in everything from Geoff LaTulippe’s hollowly humorous script to Burstein’s by rote exposition.  And aside from the compounded charm of its leads, audiences weren’t too enthused about Going the Distance either, for it managed a modest $17.8 million domestically despite seeing as many as 3,030 screens.

Long’s Scully is pretty much the opposite of the man-of-all-answers he played in last year’s misogynist He’s Just Not That Into You, as here his character is so self-seeking that he can only infer the ostensible aspects of his interactions with women.  And in all actuality, Going the Distance is more a story of his emotional evolvement than it is, as the title indicates, geographically displaced lovers, as its set-up portends Scully’s eventual acceptance of intimacy through the sacrifice of his own social comforts.  Take for example the film’s prologue, in which he trusts the word of a girlfriend who insists she need not anything for her birthday, only to learn that, supposedly, when women say something they usually mean the opposite. Though seemingly sexist, I interpret this masculine-minded maxim to be more commentarial of Scully’s amatory insolence than of actual gender-based inequity.  For upon meeting, and becoming subsequently involved with, Erin – who, after spending six impassioned weeks with Garrett in New York, had to travel back to California to finish her degree – our male lead at last comes to terms with both the give-and-take nature of relationships and the need for pliancy in one’s life plan.

But unfortunately, Burstein eschews any augmentations of these themes, leaving them to lurk as latencies behind flittingly uninspired confabs of social rumination.  One such scene shows Garrett walking, with buddies Dan (Charlie Day) and Box (Jason Sudeikis) in tow, listening to them discuss what does and does not constitute a correct masturbatory colloquialism:  Dan suggests “cracking off,” which is only decried by his cohorts.  But later Box has his own chance to offer a Lilliputian diatribe, positing that out-of-fashion facial hair can be used to evoke the era of older women’s – though not cougars’ – sexual discovery.  Less clever than it is tacky, the picture’s dialogue fails in realms of both delineation and drollery and isn’t aided by Burstein’s overall narrative complacency.  Much like the half-wasted (and poorly CGIed) bong hits exchanged by Garrett and Erin on their first night together, Going the Distance is a sieve for potential, letting its au fait airs of Echo Boomer uncertainty dissipate within its atmosphere of relentless puerility.

Despite DP Eric Steelberg completely air-balling the photogenic potentiality of its bicoastal locales, Going the Distance is represented fairly well on this Warner Bros. Blu-ray, though visual schema can be at times problematic.  A few instances of artifacting crop up in moments of more patterny minutia and contrast, as a whole, could be more robust.  That said, skin tones project a believable level of naturalness, even if they are too often defined by Steelberg’s tendency to shoot with a monochromatic tinge – every shot seems dominated by a particular color, giving the overall image a more-inconveniencing-than-kaleidoscopic quality.  Complaints aside, the film’s palette of primaries offers a pleasingly brilliant punch, with blues and reds appearing especially less restrained than the rest of the picture’s arid aesthetic.  The sound side of things, thankfully, fares much better and offers a stable, appropriately dynamic audio track that does well in ensconcing the viewer within the pitter-patter of barroom chatter.  If only Burstein would had granted her work any type of visceral concernment, this BD release might well be worth listening to.