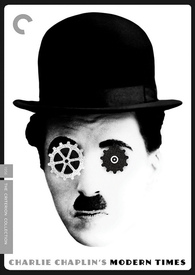 Modern Times begins with a transparent graphic match that establishes a parallel between working class drones and lambs being led to the slaughter—a blunt motif suggesting that the militant rigidity of America’s Depression-era work force was collectively laboring toward certain oblivion.  Which is why I wonder what director/actor Charlie Chaplin would make of our own modern world, because, as the film predicts, encroaching technological intervention has progressively complicated our lives and, in turn, has also heightened our society’s already aggressive sense of efficiency.  With Modern Times, Chaplin seemingly suggests that the intimacy of interaction dissipates as we struggle for furtherance—that industrial evolvement leaves humans treating each other merely as means to ends and, accordingly, the emission of empathy comes to be seen as a distracting byproduct of capitalist achievement.  And though the extent of the picture’s sardonic sensibilities is slyly concealed beneath the silent comedian’s physical resiliency, the heavy strokes with which he paints the film’s thematic landscape end up elucidating his acerbity.  Sure, Chaplin employs a “laughter is the best medicine” mindset to his explicitly-cultural-yet-latently-artistic critique, though I can’t shake the feeling that even this conceit—and its implications about the direction of cinema—trivializes both the piece’s didactic and comedic potencies.

The hallmark bonhomie of Chaplin’s oeuvre, his derby-adorned, cane-wielding Tramp, makes his inauspicious exit from the film world after this work’s final frame, though not before befalling some of the more obvious examples of its epoch’s adversities (class division, lay offs, and the like).  He’s laboring on an assembly line at the film’s opening, only to be overwhelmed—and subsequently fired—after suffering a nervous breakdown while performing the unrelentingly repetitious duty of tightening bolts.  But recurrence isn’t the only catalytic component of The Tramp’s surrendered sanity, as earlier he’s assaulted by the humanity-eschewing factory line feeding machine that’s been designed to amplify profits by eliminating lunch breaks.  Thus unfolds one of Modern Times’ more memorable moments, though Chaplin’s incessant insistence of taking things to the point of tedium and then hoping they’ll turn humorous again comes off as inspirationally unreplete.  Much like the dehumanizing habitualness of The Tramp’s job, Chaplin’s comedic approach reads as a linearly building litmus test for patience; he doesn’t defer from a gag’s primary punch line enough to warrant the kind of time-filling aridity that eventually amasses.

Of course, the actor’s athleticism and grace do accord some wonderful moments, like his blindfolded roller-skating near a department store precipice.  Such a scene is one of the more telling examples of what Modern Times seems to strive most for— an assortment of scenarios that mirror the time’s economic climate in terms of its perilous unpredictability.  Also indicative of the zeitgeist is how The Tramp served three jail sentences with his most severe charge being doled out after he was mistakenly believed to be leading a communist rally.  In this, Chaplin colorfully criticizes the American justice system as well as the country’s romantically capitalist inclination.  And while this playful example of editorializing does well in disporting a population’s foibles, the film’s artisan evocations – specifically the way the work extols the conflation of movement and sound but exhibits a disdain for dialogue – comes off as captious enough to suggest tragedy in even its ubiquitous closing shot.  As The Tramp and girlfriend gamine (Paulette Goddard) – whose reallocated orphan siblings have long since been forgotten—walk away into the yonder mysterious, Chaplin extorts not an air of gaiety over his masterful silent career but a sense of foreboding over what’s to come next—not only for his iconic personage but also for cinema at large.  Of course, Modern Times is not without its charm and aware-enough political pulse but, when asked to decide between it and the impractical, sentimental innocence of Chaplin’s City Lights, I’ll elect for the latter every time.

For a film from 1936, Modern Times translates remarkably well in high-definition in the way this Criterion release expertly exhibits contrast without the usual indications of digital manipulation.  The Tramp’s get-up looks as comically ill fitting as ever, as the now-visible textures of his dilapidated dress accord a certain amount of pity that’s gone previously unseen.  Transitions, though, do demonstrate some stability problems, but the excess noise that abounds in some shot-initiating frames quickly subsides.  The remastered monaural soundtrack also echoes exquisite during the film’s more action oriented instances, and is largely a markedly crisp audial exhibition that doesn’t divulge any of the archaic hums or hisses that are akin to works of this era.  Color me impressed.