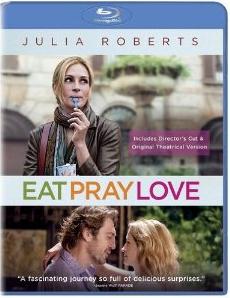 Julia Roberts is back where she belongs in Eat Pray Love, which leads off the week's home video release slate. She plays a woman caught between love and societal expectations.

Elizabeth Gilbert's best selling memoir is ripe material for this Pretty Woman, and Roberts anchors the film as well as a star of her status should. But her character remains a mystery for far too long, unable to bring us along on her soul-searching quest.

Roberts is Liz, a woman who leaves her baffled husband (Billy Crudup) behind in order to find herself first in Italy and, later, at an Indian yoga retreat. Her journey includes pat discoveries like enjoying gourmet food without guilt and making new friends (like a scene swiping Richard Jenkins). But when love re-emerges in her life in the hunky form of Javier Bardem, it feels like an afterthought, not the culmination of her self-reclamation project.

The Blu-ray presentation includes both the theatrical release and a Director's Cut, plus interviews with Roberts, Gilbert and director Ryan Murphy of Glee fame.

I'm Still Here arrives on Blu-ray with its two-year-old mystery already solved. Joaquin Phoenix's transition from actor to hip hop hero was all a stunt, a slice of performance art captured in this new "documentary." So where does that leave the film, a testament to an actor willing to alienate audiences to show the murky marriage between art and the media covering it?

What remains is a poorly lit montage of "actor gone wild" sequences which neither illuminate nor entertain. JP's attempt to reboot his career as a rapper seems preposterous at face value, and watching him dabble in drugs and self delusion doesn't build a character as much as a train wreck we can't invest in emotionally.

The off-screen dance between the reality behind the project and its media coverage proves far more engaging than anything here.

The Blu-ray extras feature an audio conversation with journalism professor Christine Spines on her knotty ties to the project, some mumble-filled deleted scenes, plus copious commentary from Phoenix, Affleck and a gaggle of other players behind the project.

Flipped finds Rob Reiner scrambling to reclaim his mojo in a genre best suited to his skills—the coming of age yarn. The ‘60s era story focuses on Bryce (Callan McAuliffe) and Juli (Madeline Carroll), neighbors who can‘t stop running into each other both at home and at school. The teens flirt and fight, with Bryce wishing Juli would just leave him alone. Yet over time he realizes his feelings for her are far more complicated than he imagined.

The film's gimmick—sequences are shown in both the characters' perspectives—wears out its welcome quickly. And some supporting players, like Anthony Edwards as Bryce's grumpy father, feel miscast. But there's something old fashioned and sweet in the storytelling, the sense that Reiner might not be back at the top of his game, but his instincts haven't abandoned him entirely.

The Blu-ray additions include cute feature segments like "Flipped: Anatomy of a Near Kiss," "The Differences Between a Boy and a Girl" and "Embarrassing Egg-scuses," a riff on a key battle between the squabbling leads.

Countdown to Zero could be the scariest movie of the year, and we never see Jason, Michael Meyers or Freddy Krueger darting through any nightmares.

The documentary tracks the history of atomic weapons, from early testing to the ever expanding members of the nuclear club. The movie is a plea for arms reduction across the board. Some might argue as to the stabilizing nature of nuclear proliferation, but few won‘t be horrified to hear how many nuclear accidents were narrowly avoided through the years.

The Blu-ray disk also features deleted scenes and interviews, a letter from the filmmakers regarding the project and archival nuclear footage.