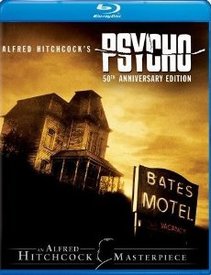 There's a recurrent sense of reciprocity to Alfred Hitchcock's Psycho - one that manifests itself in the picture's compositional and philosophical emergences - in the way the London-born director regularly draws upon the dynamic of black v. white (both ethically and aesthetically) as well as action v. reaction. But suffice it to say that Hitch was never as lauded for his attempted psychological exegeses as he was his auteurist provocations. In this regard, Psycho is consistent: hurried exposition may dilute its empathic potency, but this conceit becomes secondary to his camera's ability to convey more than his characters ever could. And, of course, this isn't to suggest that the evocations he elicited from his actors were in any way inadequate, but that the piths of his works were rarely rooted in his principals' performances. We'll never forget the insularly acquired, quivering-lipped lunacy of Anthony Perkins' Norman Bates, to be sure, or even Janet Leigh's assumingly introspective Vivian Crane, but the apex of the film's accomplishments lies not in these adroit depictions but in narrative manipulation and cinematic sensationalism - specifically the way Hitchcock impresses upon morality by contrasting implications of impulsion with ones of regret.

Starting with an establishment shot of the greater Phoenix area that increasingly consolidates with each and every edit, the opening sequence of Psycho eventually, and gracefully, peers scopophiliac into a hotel room occupied by bra-clad Crane and boyfriend Sam Loomis (John Gavin). And while this can be interpreted as an antithesis to the commencement of Hitch's own Rear Window - which begins by exploring the innards of photographer L.B. Jeffries' apartment before outwardly taking stock in the ecology of his communal courtyard - it instead serves to portend future latencies of fetishistic voyeurism (including those pertaining to artists and their audiences) while simultaneously evincing the relative familiarity with which such a scene can occur. In this, the congenital commonality with which Marion is characterized is meant to override the slapdash dialogue that introduces her and Sam's amorous impasse: she, tired that their gatherings revolve around gratification, wants a commitment; Sam, living in California and paying alimony to an ex, is too proudly masculine to invite her into his life of modesty.

Immediately succeeding the shower scene, and Norman's eerily understated fulfillment of the custodial duties accorded by his murderous matriarch, Hitchcock subverts his opening shot by fixing his frame on an object of intimacy before drawing his lens backward in an extrospective flourish. While the first half of the film dealt explicitly with induction and internalization, the second, from the get-go, is indubitably invested in bringing its social sphere full-circle. As such, we begin paying mind to the appearance of other parallels and, through this, can take stock in the ones previously presented as well: the spatial vacuousness of a drain linked via match-cut to Marion's equally empty oculus; the decorous dichotomy of the Crane sisters' personalities; Marion's moral asymmetry and how it's mirrored through the mise en scène of her ensembles; and, of course, the give-and-take of Norman's hemisected persona. And although Hitch was no psychological savant, his film does explore the effects of one particular phenomenon, which is how humans react when their environment is ripped out from under them. In a similar sense, this is what the director purports to do to his audience, as Psycho boasts not only the narrative bisection that echoes its tonal and thematic concerns but also a surreptitious staginess in the way the focal depth of John L. Russell's frames almost never emphasize a single object; nearly everything is invariably in focus, giving the picture a dreamlike lucidity that only heightens its omnipresent sense of immediacy. Sure, its editorializing is a bit obvious by modern standards and expository matters come off as more stylistic than sensible, but the movie remains a mainstay in not only in Hitchcock's accomplished catalog but also that of historic American horror. Even as it celebrates its golden anniversary, Psycho still shows a keen sense of function and form that dominates even its contemporary derivatives.

Though my overall impression of this Universal release is resoundingly positive, as the incredibly actualized, monochromatic colorization of its shades-of-gray aesthetic gives way not only to pristine detail but also immaculate clarity, a bit of artifacting appears in some of the image's busier moments. This, however, is hardly a common occurrence - despite appearing in the aforementioned first scene - and isn't enough to distract from the otherwise extravagant visual minutia that can be observed in everything from foreground faces to distal set pieces. The aural accompaniment is also overwhelmingly dynamic compared to the SD-releases I've encountered, due in large to the redesign of its lossless DTS-HD Master Audio 5.1 mix. And while the reallocation of specific effects in a purported attempt at enhancing audible economy may seem a bit specious, it works rather well here and adds a sense of immersion to a work that's effectiveness is appurtenant to its ambience.